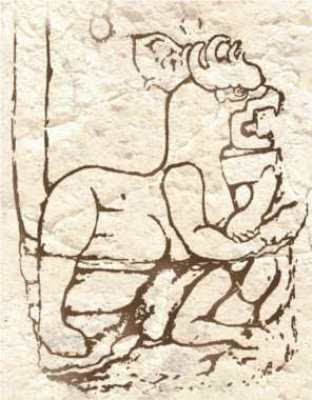 MEXICO – In Vera Cruz, Guerrero and Morelos (states of Mexico), archaeologists of the National Institute of Anthropology and History (INAH) found representations of mythical beings who were believed, until then, were ignored by the ancient dwellers of the region: dragons.
Images carved in stone, clay sculptures and paintings dating between the years 1200 and 400 BC indicate the practice of a cult of worship to this fantastic animal: the dragon Olmec. There is no mistake. This is not the plumed serpent known and called Quetzalcoatl or Kukulkan. It is another more ancient creature.
The olmec dragon is depicted as a chimera, mixing physical features of snake, bird and jaguar. It also appears like an anthropomorphic being, a dragon-man.
The images have peculiar traits of the Olmec culture: the flame-shaped eyebrows and a cross, of the type called cross of St. Andrew, located between the eyes or on the back. The chief of excavations at Chalcatzingo, in Morelos, Carolina Meza Rodriguez adds: Another interesting aspect of Olmec dragon is that his mouth emits signs that seem like combinations of commas. It is not known whether the signals represent mere fumes or they are words, names, belonging to an unknown language or writing.
The olmec dragons are always related to the cave entrances. It is speculated that they are the symbol of power of an ancient lineage of leaders who ruled the Olmec people between the years 800 and 500 BC. In some cases, the iconographic elements associated with the dragon are found in different parts of a cave. Thereby, the entire chamber becomes a dragon. The Olmec people is the oldest sedentary culture today known at Mesoamerica