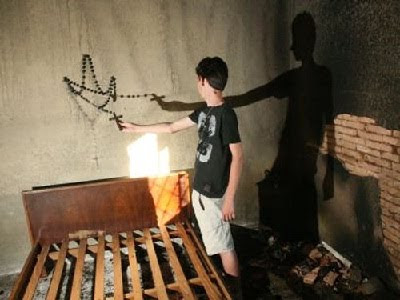 The painting of the image of a saint, a rosary and a crucifix
on the wall. Objects that escaped the flames of the haunted house


BRAZIL. SÃO PAULO, hinterland – At Poloni, a little town of São Paulo State, strange phenomenons are happening in a house. While Some say that is a ghost, a damned soul, others blame a poltergeist.

The residents, a lady of 62 years, her daughter, 32 years and a grandson, a teenager of 14 years old, all of them say that the phenomenons began four months ago.

Objects that disappear or are thrown against furniture and walls; electronics devices begin to function from nothing, without nobody action.

On Tuesday, December 7 (2010), the house caught fire. All rooms have been affected by flames. But a paint with the image of a saint, a rosary and a crucifix were saved.

Some experts are investigating the case. On one thing everyone agrees: the spiritualists, parapsychologists and also the police. All of them thinks that the incidents are related, in some way, with the adolescent.

Police works with the hypothesis of a joke, a play, but the young H.C.A. denies any involvement and says: I would never do anything that would harm my family. I am following the suffering of my mother and my grandmother.

A woman, neighbor witnessed one of the paranormal occurrences. Other neighbors, sympathize with the family, are gathering in groups to pray and ask God's help. 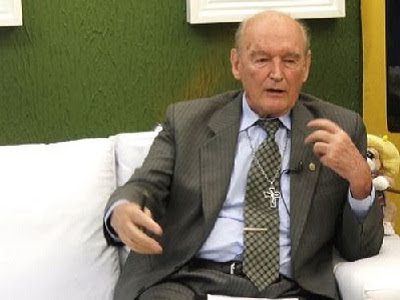 Oscar Gonzalez-Quevedo, Jesuit priest born in 1930.
Spanish, he is a Brazilian citizenship since the 1950s.
Parapsychologist, a university professor, writer and lecturer.


For the spanish parapsychologist Óscar González-Quevedo, more known like priest Quevedo, the teenager H.C.A., 14, is responsible for the paranormal phenomena that happen in his family home in Poloni.

Quevedo said the boy is possessed by a negative energy and, unconsciously has caused these phenomenons. As a priest I belive that these events have no relation with the devil. These phenomena are common in parapsychology, said Quevedo.


But Quevedo contradicts itself: it says that the adolescent is with a psychological disorder like depression, anxiety, irritability or even loss of attention by the family.

However, the parapsychologist admits, too, that the teenager, though unwittingly, is using a playful spirit. Well, or the mind of the boy i, only, is producing the phenomenons or the whole thing has the participation of a disembodied entity. Meditate...


A doctor and spiritualist leader interviewed the boy and concluded: spirits are trying to avenge the family. The Centro Latino-Americano da Parapsicologia of São Paulo (Latin American Parapsychology Center) will investigate the phenomenons that would be occurring in the house. According to a spokesperson for the center, a professor specializing in paranormal phenomena should visit the house in the next days.