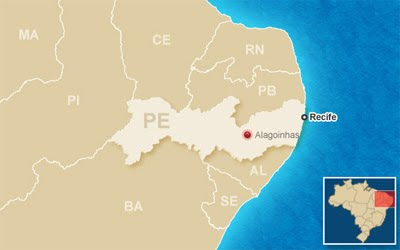 Image: Arte/G1
CEARÁ — 22 of may day, 2010In the city of Sobral, hinterland of Ceará state and also at Fortaleza, capital of the same state earthquakes, that attained among 3,9 to 4,3 in Ritcher Scale happened and have scacre the population. The tremors began some years ago. While the seismologists say that there is no reason to worry, nothing to fear the fact is that the frequency of the phenomenon only increases.
In 2008, in the month of may, the tremors reached even four degrees on Richter Scale. The fact occupied the headlines of the channels of communication in Brazil. More of thirteen cities of Ceará were hit At the state, this phenomenon became an ordinary thing. In april of 2009, occured tremors at the region. The seismic movements are became more and more frequent. Residents of the region between the city of Sobral and Fortaleza, capital of the state, are forced to leave their homes because of damage to infrastructure. The walls are cracking.The largest earthquake in the northeast region, which reached 5.2 degrees on the Richter scale, occurred in November 1980 on the east coast of Ceará.

ACRE — 24 of may day, 2010. In the begin of the afternoon (3:18 a.m., — GMT, schedule of Brasília),an earthquake with magnitude of 6,5 degrees in Ritcher Scale hit the state of Acre and the lands around that area of the Amazon region. The phenomenon was detected by the Geological Service of the United States of North America and confirmed by the Observatório Sismológico of the Universidade de Brasília (Seismological Observatory of the University of Brasilia, UnB).
Acre is a one of the 26 brazilian states of the federation that presents great seismic activities. The cause of this is the proximity in relation to Andes Cordillera. There, the impact among the plates of the underground rocks, the tectonic movements that occur along the Pacific ocean shore of the Latin America, mainly in the country of Chile. The tremors at amazonic region are echos provoked by the movements further west.
PERNAMBUCO — At this other state of northeast region of Brazil, the tectonic movements, although with less intensity are very frequent. At March 3, only in the city of Alagoinha, occured more than 60 tremors that reached 3.2 degrees on Richter Scale. In this city, the aftershocks of land have became routine and they are not so insignificant how someone may think. With the high frequency of occurrences, the structures of the buildings aren't supporting more vibration constants: the cracks are already appearing. But the most frightening is that many people reported hearing, on the occasions of the tremors, a sound similar to the thunder that echoing from the deep of the earth.The phenomenon has been accompanied by the department of seismology at the Federal University of Rio Grande do Norte (UFRN), which has adequate equipment for monitoring earthquakes spreaded in several cities in the interior of Pernambuco
SÃO PAULO — The tremors have been also registered the southeast and south regions of Brazil. At the states of São Paulo, Rio de Janeiro, Paraná e Santa Catarina the people stayed surprised with the occurences of the phenomenon. In april of 2008 the earth trembled with an intensity of 5,2 degrees in Ritcher scale. At the four states, the quakes were felt. According the Observatório Sismológico da Universidade de Brasília (Seismologic Observatory of Brasília University - UnB). The epicenter was located in the Atlantic Ocean, 270 km far from São Paulo.
At the years of 1970, the text books of Geography and the teachers taught that Brazil, being consisting of very ancient lands, not suffered from earthquakes. Now suffers. Because everything changes, everything at the Universe is moving. The planet also. The Earth, after all, is not a dead body drifting in space. In contrast, the Earth and is moving in itself, indifferent to the discomfort it can cause human kind.