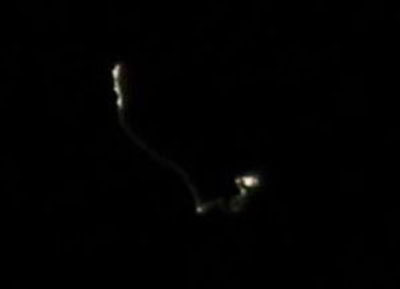 CEARÁ ─ In the small town of Mulungu, Guritiba location ─ Maciço of Baturité, farmers and peasants reported the sighting of a UFO. The spacecraft has landing at a banana plantation. The plants were burned and suffered a cut evenly. The phenomenon would have reached a radius of approximately thirty meters. Ufology experts of the Associação dos Ufólogos Independentes do Brasil [Association of Independent Brazil Ufologists] visited the site and ensure: the region was, in fact, visited by a flying saucer. According to the report of these researchers, these episodes occur in the region every ten years.
The people were very scared and called the TV Jangadeiro's team to record what happened. There are reports of curious who visited the place of the supposed landing of the spacecraft and suffered physical injuries there. A wound appeared on the forehead of a man and a woman contracted a strange allergy in the form of red spots, having gone to the site. The local resident Carlos Eudes de Souza Miguel, watching the movements in the sky, called, by phone, the radio broadcaster Tony Siqueira who went immediately to the site Guritiba. There, they took pictures of the luminous object in the night of Mulungu.
Sources:
População de Mulungu no Ceará assustada com suposto ovni
In Vooz Noticias ─ published in 28/september/2009
[http://www.vooz.com.br/noticias/populacao-de-mulungu-no-ceara-assustada-com-suposto-ovni-17402.html]
Portal Ufo
[http://www.ufo.com.br/index.php?arquivo=notComp.php&id=4456]