MEXICO. STRANGE CREATURES. STRANGE PHENOMENA. PLASMA-LIGHT ENTITY. STATE OF COAHUILA. ON THE ROAD, BETWEEN THE CITIES OF SACRAMENTO AND NADADORES.

On 10 May 2016, around 2 pm, the Secretario del Ayuntamiento Swimmers (scrivener of prefecture) - Israel Guerrero, shared on your Facebook account, the image of a extremely strange light formation.

The sighting happened on the road. Guerrero was not alone in the car - driven, in that occasion, by the Regidor de Educación y Cultura Sport (City Secretary), Gustavo Duarte de la Cruz. The image was recorded with a mobile multimedia communication device - a smartphone.

At that moment, the intention was take a photograph a formation of three big agaves, typical plants of the region (which can be seen  at right of the luminous body).

It was to be a photo of landscape but for a split second he saw something shiny in the frame. Duarte asked to return to the place.

There was nothing there but the record was made. The vision of the bright entity appeared in the photograph. Israel Guerrero said that  was the first time he saw something like this and commented:

'The universe is infinite and I think we don't have the knowledge of all the beings that exist in the world. I do not know what it was, could be something common but I believe in ghosts, anything is possible. I can not prove but I can not rule out possibilities.

The Mystery of Dracula's Tomb in Naples

The tombstone of marble that, inexplicably, emits a lot of heat - has an inscription in mysterious language. Researchers investigating this strange monument. They try to decipher the message recorded on the effigy that - it is believed, may be the real tomb of Count Dracula, Vlad Tepes (1431-1476), from Romania.

MYSTERIES. ITALY. NAPLES CITY. Researchers at the University L'Orientale of Naples are intrigued by the marble monument located in the architectural ensemble of the Church and the Franciscan convent of Santa Maria La Nova, Naples. Besides an indecipherable inscription, engraved in a language unknown, from one point of the tombstone, exudes a strong and inexplicable warmth.

Two countries already claims to be the place of the 'real tomb of Vlad Tepes III, prince, ruler of Wallachia. These countries are Romania (birthplace of the famous warrior) and Hungary.

Indeed, the tomb of the mythical Impaler is a mystery. According wth historical known  tradition the Prince Vlad died waging war against the Ottoman Turks, his longtime enemies.

His strong personality and even his appearance, were described by Enea Silvio Piccolomini, the future Pope Pius II - in his 'Comments:' ... an honorable man and handsome in his person ... a righteous man... This shows that not all at the time he lived in the prince, they highlighted the bloody cruelty of his character.

He was a Christian struggling to preserve their Christian homeland against the invading infidels. Even being, since that time, in much of the popular imagination - especially of their enemies - the legendary Impaler, lunatic sadist who took his meals enjoying the martyrdom of their victims, tortured with the most painfull practices.

Reportedly Vlad had learned these inhuman methods, he learned how to be a monster - Make them have afraid of you! - With the Ottoman Turks themselves in a period of his youth, when he was their prisoner.

He hated the Turks and died warring against - Basarab III cel Batran Laiotă - (http://pt.wikipedia.org/wiki/Bassarabe_III_da_Valáquia) - who disputed the power in Wallachia supported by the Ottoman Empire. The best known version tells that Besarab himself killed and decapitated Vlad Tepes. The head, as a trophy, would have been taken to Constantinople.

Another version says that - by intervention of his daughter, Maria - Vlad escaped to Italy taking shelter in Naples under the protection of -  in the time -  city-state's queen, Juana of Aragon (1455-1517, born in Spain, to Italians - Giovanna di Trastámara) - being consort of the king, Ferdinando I.

THE ROMANIAN TOMB OF DRACULA 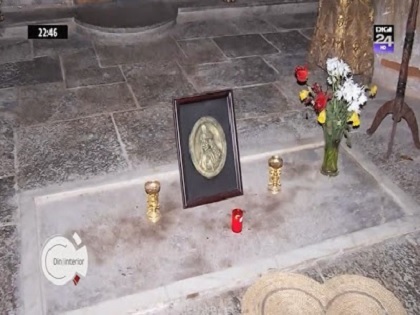 But many don't agree with this version of history and say that in Snagov, are buried mere horse bones.

These believe that Vlad, although badly wounded in the battle, was rescued by their weight in gold and forwarded to her daughter Maria that, during the Ottoman occupation, had moved to Naples.

Despite the discussions, there is some evidence to support the idea of the death of Dracula on italian soil and his tomb in Naples.

The uncle of Queen Juana was King Alfonso of Aragon (1396-1458 - reigned between 1416-1458) - Freemason belonging to the Dragon Order (hence the nickname Drakul) as well as outside the Prince Vlad, following the tradition of his father. Maria, at seven years old, was given to be educated by a Neapolitan lady and later married a member of Ferrillo family.

Then,  would not coincidence that the tomb of Dracula in Naples be officially known as the Matteo Ferrill tomb. The funeral monument is within a smaller cloister (a room) of the convent of Santa Maria la Nova. Its authorship is attributed to Jacopo della Pila.

The Tomb of Matteo Ferrill - or like it is called, Tomb Partenopea - is adorned with an elaborate representation of a dragon. It is a curious fact when is known that the deceased was Dracula's son in law.

In addition, the monument is adorned with other images which are rare to be found in European graves of the West. Below of  the great dragon, there are two sphinxes.

But that's not all. The marble was submited to exams by researchers from the Istituto Nazionale di Geophysics and Volcanology (INGV / Italy - 2015.

On the tombstone occurs an anomalous phenomenon: the rock exudes an inexplicable heat whose origin or cause no scientist was able - still - identify or explain.

To complete the mystery, the inscriptions on ancient characters - that seems to be a code, they are a challenge that - at the time of this reportage - was an indecipherable document. 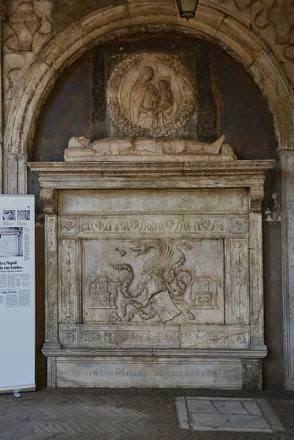 Until then, philologists discovered almost nothing about this weird language. They konow what it not is:  it isn't Slavic, Croatian or Bulgarian, Macedonian or Cyrillic. There are signals that appear to be Latinos. Others, Greeks, Coptics, but it is impossible to distinguish a single word.

The text would been designed by an esoteric expert, perhaps someone who belonged to the Dragon Order. Thus, the words on the tombstone would only be understood by those for who the code keys were known. 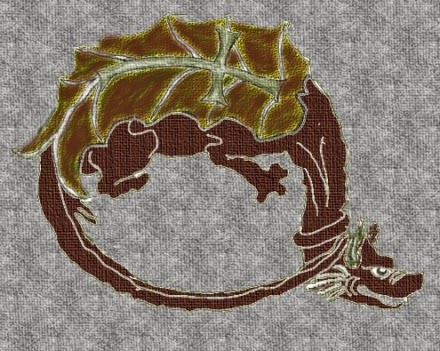 IMAGE. Emblem of the Dragon Order

The Dragon enters the life of Vlad Tepes as his father's heritage, this, yes, member of the  Dragon Order and so called Vlad Dracul.

The Dragon Order was a military-religious society, Christian, founded in 1387 by Sigismund of Luxembourg, later Holy Roman Emperor and his wife, Barbara Cillei.

The coat of Tepes family is usually described having, like main figure, a dragon. But the truth is that the most prominent symbol coat of arms of the princes of Wallachia  is an eagle.