TAIWAN. 2015, JULY. The video was originally posted on the website Live Leak, where information is scarce, what is very common on the Internet. The footage would have been made with a telephone in July 28, 2015, on the banks of a river in Taiwan.

The creatures, with their strange and frightening aspect, are animals of this planet. They are worms classified into two types: 1. nematomorpha (Nematomorpha) or 2. Gordiáceos (Gordiacea) worms. 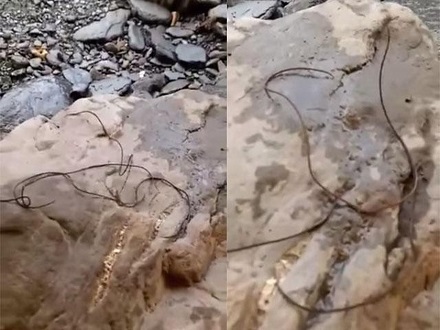 The hair-worms are dangerous parasites and are a risk to the health of unsuspecting bathers in waters of rivers and lakes.  They can invade the human body  penetrating any cavity. And this, it must be very painful.


These worms - that are also called 'verme-crina-de-cavalo or even hair-worms belong to a family of parasites and exitem 331 known species of these beings.

Their size can vary: small, 5 cm or large reaching 1 meter in length. They are very thin, with a diameter measuring amid 1 to 3 millimeters. Inhabit salty and sweet waters of almost all parts of the world except Antarctica.

The gordiáceos are typical of freshwater and are considered semi-terrestrial animals - like these that appear in the video. Their presence on the rocks, in the landscape - indicates that, in fact, the site is located along a river.

The language also confirms that the place is a country in the Far East, Asia - where exist about 100 known species of this worm.

The fact that a group of these animals be observed in this situation, writhing on the rocks, far from the water for much time may indicate some sort of contamination / imbalance / environmental poisoning.