The Sea Dragon of Andalusia 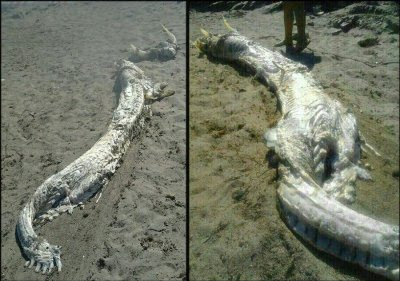 SPAIN. THURSDAY, Aug. 15 (2013), the lifeless body of a unidentified marine being, appeared on the sands of Playa Luis Siret - coastal, pueblo of Villaricos, Cuevas del Almanzora, Spanish municipality in the province of Almeria - in Andalucía.

The animal, of fantastic appearance resembling a sea dragon, measuring about four meters long, had advanced signs of decomposition.

A bather, a woman - when faced with the strange creature, reported it by telephone - to the emergency service of Cuevas del Almanzora - which attends by the number 122.

Authorities were mobilized: the Civil Defense PROMAR contacted the Association for the Defense of Nature Navy (Marina Defensa de la Naturaleza) whose representatives, quickly, realized that the animal was... merely ... a whale ... (?!)

Meanwhile, members of the Asociación de la Defense en Fauna Marina Almería, according to its coordinator, Francisco Toledano, went to the place analyze the corpse and compare the creature with the pictures obtained. Toledano said:

We had access to the images of body on sands, probably thrown there by strong waves. The pictures are being sent to experts in an attempt to identify the specimen. At first glance it seems a kind of fish but the state of decomposition makes recognition.

Because of the health risks resulting from exposure of putrefying matter, the Civil Defense decided to bury the carcass.