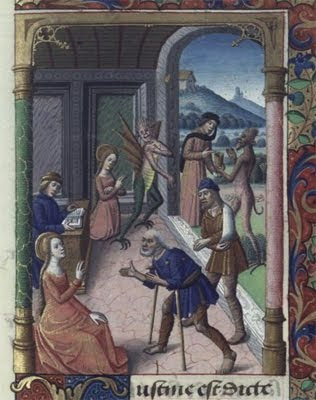 At 30 years Cyprian was a famous and powerful sorcerer, well versed in various wonders of magic like astrology, necromancy, the science of filters, oracles, potions, the dominion over the elements of nature. He had the subservience of a legion of demons, protected from the devil himself of whose was a server and a partner.
However, seeing that his demonic tricks of witchcraft were unsuccessful against a Christian virgin. Perceiving that Devil himself was being defeated by faith in Christ, Cyprian, disappointed with Satan, converted to Christianity. Later, he died like a martyr in the name of his new faith.
Justina, was the name of the girl who faced the devil and his servant, Cyprian using only the name of Jesus and the sign of the cross. After the convert Cyprian and Justina became friends-brothers missionaries of the Christianism. In a time of great confusion around religious policies, both Cyprian and Justina were persecuted, arrested, convicted, martyred and killed for being Christians. Historically, a curious fate: centuries later, Cipryan could be tortured and burned alive for being a sorcerer.
Cyprian was martyred along with Justina. First they were beaten with whips wich were gifted with iron nails. The Saints, both stayed impassive. The executioner was angry and ordered that both were immersed in a boiler of boiling oil. Once more there was no drama or screamings. Without no more solution, the Emperor Diocleciano, chose to simply behead Cyprian and Justina. 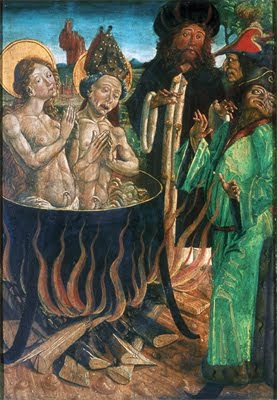