Pombero, the perverted and demoniac elf from Paraguay attacks family 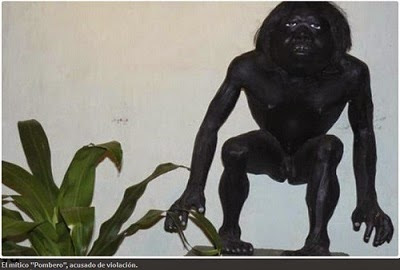 Above and below: Illustrations represent the popular figure of Pombero 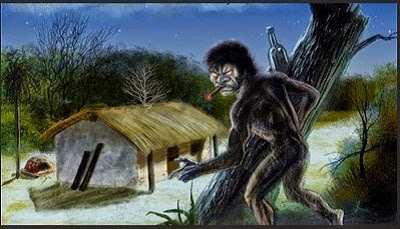 PARAGUAI. Colonia de Santa Clara. Liberación district (city), departamento de San Pedro (or San Pedro state) - The insolit case occurred at the home of a humble family, residing in the neighborhood of Santa Clara, city Liberación. There, a woman was raped numerous times by a mythical being - the Pombero.

The "Pombero" - is a mythological creature of Guarani culture origin - corresponding to the idea of a South American demoniac elf, very popular not only in Paraguay but also in northeastern Argentina.

It is described and represented as a robust humanoid, short stature, short arms and its body is covered of dark hair. Its huge mouth is endowed with long big teeth, long, very white. 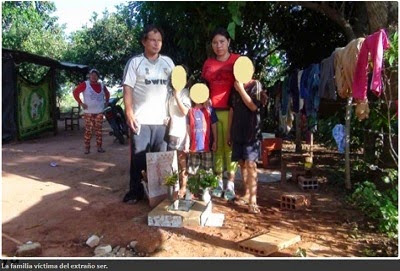 The woman claims that the mythical "Pombero" raped her without she could perceive the fact. Or, she was unconscious when the attacks occurred. She became pregnant and gave birth to a strange creature who died seven hours after birth. According to the victim, on more than one occasion, she woke up naked in his bed.

The victim, identified as Rosalia Suarez, 24, mother of three, said that stood pregnant as a result of the clandestine action of the Pombero. But, she didn't feel anything. During pregnancy, she had no symptoms and your mentrual period remained regular. She just felt an uncomfortable pain in the belly.

On Sunday - day April 5, 2015 - when we finally decided to look for a hospital, before leaving home, went into labor and gave birth to a black baby. It was a strange being.

It was born alive but died seven hours later. The family gave a "Christian burial" to the creature, in the backyard of the home where they prayed "for the soul" of unknown nature of the entity.

Rosalia also reported that has been persecuted by the Pombero for about a year. Again and again, woke up naked in his bed and, worse, once - the same happened to his daughter.

Rosalia's husband, Pablo Villanueva, said that on the night of the birth of the 'hybrid' - he had a chance to see, hidden, lurking below the woodwork structure of the attached barn to the house, the shadowy figure of the monster that everyone belives to be, indeed, the Pombero.

THIS TEXT IN PORTUGUESE & OTHER LINKS