The Giant Geographic Pentagram of Kazakhstan 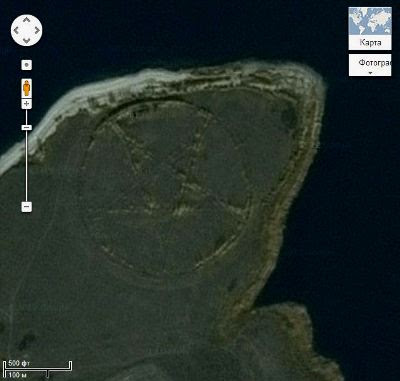 The pentagram of Kazakhstan: 1,200 feet (366 meters) of diameter. A geoglyph traced with trees of unknown authorship.

The head of fundamentals architectural design and construction of the School of Design of KRSU (Kyrgyz Russian Slavic University), Yuri Smirnov, has few historical information: The park was designed in the 30s by architect Vladimir Nusovym (архитектором Владимиром Нусовым).

Despite the traced already be known there a long time, was re-discovered in 2009 by Shairbek Zhusuev party leader "Erk" (or Erkin) - of a neighbor country, Kyrgyzstan. (KPRU, 2010)

KAZAKHSTAN. Internet users in Kazakhstan, were visualizing regions of the country using Google Maps, when found an image, at least, unusual - located in an area called Denisovsky (Denisovka, Kazakhstan), where there is a summer camp, near the city of Lisakovsk situated at the shores of the river Tobol - Kostanai province (or Qostanay).

There, the eye of the satellite clearly shows a pentagram. Before someone make ​​a relation between this image and the evil, the devil! - An End of World imminent, perhaps, it is worth remembering that, the meaning of the pentagram -  within  of a circle (or not) - doesn't correspond to the popular ideia of an association with some kind of malefic force.

The truly interpretation of this milenar historic symbol is, esoterically talking, more complex. In the context of Occult Sciences which, in no way, must be confused with mere witchcraft, the pentagram is the symbol of the microcosm that is Man.

The polarity of energy, positive or negative, to which it can refer, depends on the direction in which it is drawn: if it is depicted reversed - ie, with the tip facing down or not in relation to the reference point of the route - for example, the north.

The inverted pentagram is equivalent to the representation of an "inverted man", so disturbed that - somehow, is something contrary to the Laws of Nature. 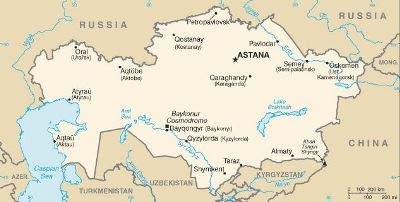 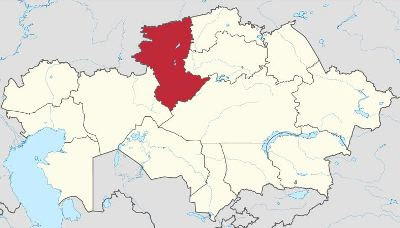 Qostanay is a province (like a state of a federation) located north of Kazakhstan, where the country has borders with Russia. It isn't  a coastal territory: the blue of water that appears on the map is one of its lacustrine basins or - more likely, the waters of the river Tobol (mentioned above). On the map, is possible see two large lakes in the country. 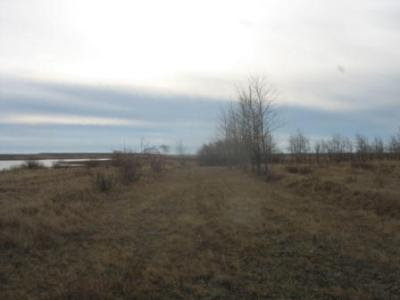 The pentagram is not recent discovery. The place is known and called The Pentagram Lisakovsk. The landscape of the park (because the local is a park, Panfilov Park) was a lot more lush in the past. The trees were planted neatly to create this figure, a pentagram whose lines are still visible in the from the space and also on the soil.

However, the question remains: why anyone would bother to do such a job landscaping. Again, appears the relationship of the symbol with the Devil or Satanism.

Even according to the Occult Sciences, it is within a circle marked with a pentagram many magical operations are realized, as "evocation of spirits", for example.

In this case, the goal of the traced is to define a restricted area where, the sorcerer will be protected against influences of "undesirables" such as evil spirits or interferences of its enemies. Perhaps, the landscaper (historicaly, unknown) has desired create a place with a positive atmosphere, under the mystical, astral and spiritual view.