Cyprian of Antioch, the sorcerer saint 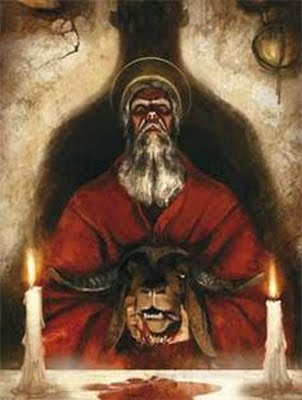 Cyprian of Antioch (of Pisídia) is a historic polemic figure whose biography lost itself in the distance of the centuries that produce the mix between legend and reality.
Paradoxal, during his life he was a powerful sorcerer and, later, a saint christian martyr. He is famous like a Saint but much more famous like a black magician.
The mistery about this sorcerer saint begins with uncertainty with regard to his biography: where he was born, when he born, his family name etc.. Only the arduous research and comparative study can provide some reliable facts.
According the Ortodox Christian Information Center, Cyprian lived at Antioch of Pisídia but was born at Cartago, north of Africa. Cartago can be may be an option unlikely. This information seems to be another result of a confusion among the saints Cyprian, especially with St. Cyprian of Carthage, (Thascius Caecilius Cyprianus) that was born and became a bishop in this city, a Christian martyr who lived in the same period of Cyprian, the sorcerer, century three after Christ.
The key of the birth's place could be in the own name "Cyprian" that can mean someone or something from island of Cyprus, Aegean sea, inner Mediterranean.
In his occultist education, which began in early childhood, since then, encouraged by his parents, that were pagans, rich, he traveled to many countries and kingdoms studying with the masters of the ancient schools of magic: in temple of Mitra, at Greece, at the mount Olympus in Cyprus, Egpty, India and and schools of Babylon in Mesopotamia, with sacedotes heirs of the ancient Chaldean magi.