Weird fireball falls from the sky at Yucatan 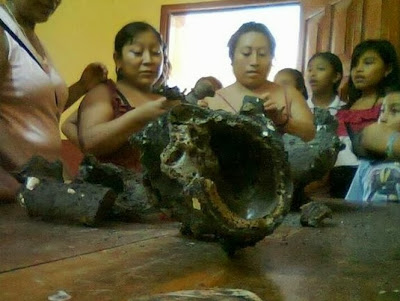 The Yucatan Fireball in TV [http://brazilweirdnews.blogspot.com.br/2013/10/the-yucatan-fireball-in-tv.html]

MEXICO. September, 22 - 2013. SUNDAY, 8:30 pm. At Ichmul, Chikindzonot city, south of Yucatan peninsula - Merida's state, in a poor community where live some remnants of mayas, the fall of a fireball that came from the sky, scared and still is scaring the dwellers of the place.

The locals were waiting to see a show of small circus in the center of the community, when he suddenly, all saw an object in flames falling in high speed. 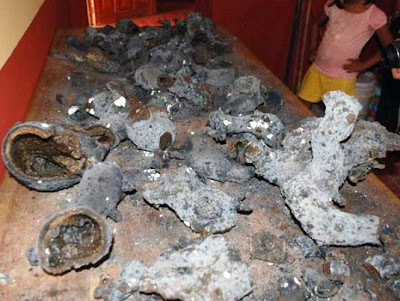 The vision was much bright. The persons stood  fascinated  the glow when it began to decrease, about to touch the soil.

When it happened, was like a pyrotechnics blast. At this moment occurred an electric blackout  and, in the zone of the fall, was observed a twinkling blue luminosity.

The municipal commissioner, Floro Koyoc Pech said that, ...during the fall of the object, a loud roar was heard by entire population and, immediately, all could observe, in the bush, a beam of light that remained shining until about 2:00 am.

People stood frightened because feared that the fire could reach to town, and later, they began to despair because the light that was fading and, suddenly, began to grow again.

One of the young of the community told that the dogs barked all the time. The strong shine of the object could be observed at the neighboring towns, like Saban, Quintana Roo, San Francisco, Peto Chikindzonot. 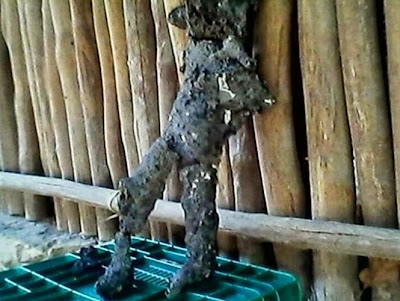 On the first hours of Monday [september 23, 2013], some people went into the forest to try to find the object that caused the blackout, and great was their surprise when they found strange fragments, of diferent sizes,  almost buried in the ground.

In its fall, the strange object crashed with two power lines, damaging them. Despite to be a sturdy material, even thus, parts of the cables were melted and broken into several pieces.

Even with some fear, the some persons resolved to rescue fragments of the object and carried them to the municipal police station There, the material will stay waiting some authority that could examine it and determine their origin.

Curious,  policemen tried  fit the pieces, trying to give some sense to these objects but, what they obtained with their efforts, is very strange. The fragments form a humanoid figure, what have caused wonder and comotion among locals and foreigners.

SPACE JUNK
The researcher of the Instituto Tecnológico de Mérida, Eddie Salazar Gamboa said the object are meteorite fragments or debris (human trash) attracted by the gravity of Earth and warned that direct contact with them may be dangerous to humans.

In an interview, Salazar Gamboa commented that this type of meteorites, usually, fall at the poles or in oceans and in some cases, on land.

The researcher explained that, usually, these pieces of cosmic rock have a hole in the center, which is result of the incandescence generated by friction, when the bolide enters in earth atmosphere. These fragments, he said, help to fertilize the soil where they are deposited.

Salazar Gamboa emphasized those facts should not cause alarm among the population, as it is proven that daily fall, in average, amid ten or more tons of these fragments on our planet.

However, urged people don't must have contact with these objects because they may contain radioactive material and, eventually, can cause certain types of cancer.

The Yucatan Fireball in TV
[http://brazilweirdnews.blogspot.com.br/2013/10/the-yucatan-fireball-in-tv.html]