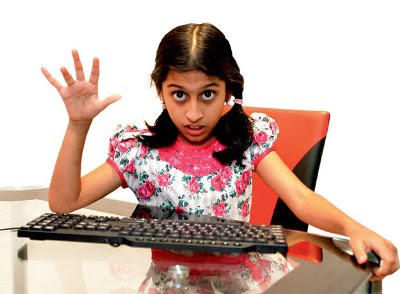 UNITED ARAB EMIRATES. In the city of Sharjah (the seat of government of the emirate of the same name), Nandana Unnikrishnan, a girl of Indian origin, nine years old (in 2013),  Autistic and that also is carrier the Savant Syndrome * - caught the attention of medical experts from around the world when at the end of March (2013), a report in the Khaleej Times revealed his telepathic ability. Nandana Unnikrishnan can undoubtedly read the mind of his mother.

* People with savant syndrome have extraordinary abilities, but they have serious mental disabilities too, including autistic disorder.

The extraordinary skill of the girl appeared two years ago (in 2011). The girl began to manifest a kind of pre-science (prior knowledge) of what his mother was thinking or - even - about to say or do. At first, the parents considered that - the many times in which the girl anticipated the words and gestures mother - were mere coincidence.

Nandana's mother, Sandhya,  tells: She can feel my emotions and read my thoughts ... She comes to me and says the name of the food I am thinking to prepare. If me and my husband we decided to take her somewhere she anticipates and reacts accordingly.

Nandana was diagnosed autistic when he was a year and a half old. More specifically it has a disorder of autistic spectrum (ASD), syndrome of attention deficit hyperactivity disorder (ADHD).

On the other hand, the Savant Syndrome, found in about one in 10 people with autism is a mental disorder whose carriers have great intellectual ability coupled with a deficit of intelligence. Such skills are always linked to an extraordinary memory.

Sandhya continues: Initially, it was very difficult for me teach her the concept of some objects. I had to fight hard to make her understand what is a cup. But ... these days (after that telepathy began to manifest itself) is very more easy to her learn something. She is good at math. But sometimes I feel that when she does her homework fast, it's because I'm Thinking about it ...

Nandana has speech problems. Has much difficulty in pronouncing words clearly. So the parents took even more time to believe in the telepathic bond or link between mother and daughter. Then, in January this year (2013), Nandana learned to use the computer keyboard.

Sandhya explains: I taught her how to use  the keyboard ... Now, if I ask her to write what I'm thinking, she can do it. Sometimes spelling errors happen and she still does not understand well the concepts of punctuation. If I say "space" (between words) in my mind, she types the word "space" instead of typing the "separation" between terms. 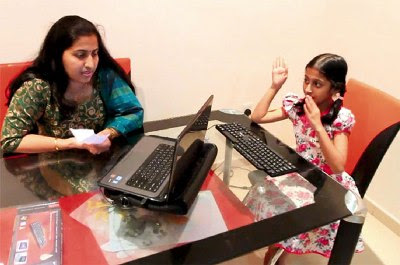 Sandhya Unnikrishnan does not fit the common pattern of the mother of a child with special needs. When She realized that Nandana was autistic, she began to study and did a degree in Applied Behavioral Analysis with two-years of duration is also and post-graduation in Socially Integrated Rehabilitation (Community-Based Rehabilitation) in Bangalore University,  India. She is the particular teatcher of her daughter, who attends the Grade 3 in a regular school in Sharjah.

In late February the parents took Nandana for a Child Guidance Clinic (Child Guidance Clinic) where the case was examined by a team of experts including: a psychiatrist specializing  ̶  Dr. Jeena Fiji (Sunny Speciality Medical Centre in Sharjah)  ̶  a social assistent, an educator also dedicated to children with autism and related syndromes and also a group of nursing. All witnessed the telepathic ability of Nandana. 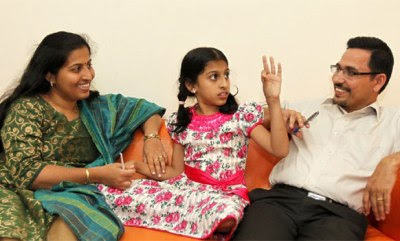 The newspaper Khaleej Times (DUBAI/UAE) received a copy of the certificate issued by Dr. Jeena Fiji in which the physician claims that Nandana realy has the capacity to capture the thoughts, desires and intentions of her mother.

So, Mr. Unnikrishnan, the father of the girl, made contacted, by phone, with the newspaper, just before a copy of the certificate issued by the doctor to be delivered in the newsroom.

His goal is not to expose his daughter but call the attention of scientists in order that the capacity of Nandana can, not only be explained but used for the benefit of the development of the girl in the overcoming the limitations of autism.

Despite the skepticism, the editors of the Khaleej decided to investigate and sent reporters to the residence of Unnikrishnan. The girl underwent some tests and the journalists were completely baffled by the child's performance.

Then the newspaper gathered opinions of some experts working in the areas of psychology, neurology and autism specifically to evaluated the phenomenon.

Then, they discovered that autistic children and adults, as well as carriers of Savant Syndrome (or Syndrome of Wise), in fact, possess intellectual abilities disconcerting as photographic memory, exceptional musical memory ie they are able to play a song perfectly after hear it once, do complex mathematical calculations mentally and quickly, for  example.

However, no researcher has knowledge of a case similar to of Nandana: a carrier of Savant Syndrome with capacity of telepathic communication in any degree. And Nandana's father seems to have achieved his goal: scientists want to study telepathy of the girl to discover its origin, its cause ̶ and its effect on her development in the coming years.

The president of the Biological Psychiatry Section of Indian Psychiatry Society (IPS), Dr Philip John, one of the experts consulted by Khallej Times commented that the case of Nandana, her telepathy exercised exclusively on the mind of his mother (at least so far, 2013) could be a peculiar kind of genetic memory that could only be found (shared) between  mother and daugther - while both are live at the same time.

Savvy Kisani, mother of an autistic teenager - who also became a teacher specializing in special children, believes that some autistic sometimes have extrasensory perceptions.

Kisani says: Although they don't can say, they can see significant things that will go to happen. My son, Krishna, behaved of very strangely manner when his grandfather (her father) was near to die. Cried loudly, ran to her grandfather's room and hit his head on the door. Then, my mother said that maybe the hour of my father had come. And it had.

IN CLINIC WITH THE EXPERTS. A poem classified as "Level 2" was awarded to the mother, Sandhya. This, did read the poem mentally and Nandana typed the whole poem, reading the mind of the mother.

Then, a paper with a six-digit number written was delivered to Sandhya. And Nandana has reproduced the number in her keyboard. Another number was given to Sandhya that, this time, was separated from the daughter in another room. And the girl reproduced the number, still proving that he can read the mind of his mother even from a distance.