When Buddha-Boy Has To Be Bad Boy 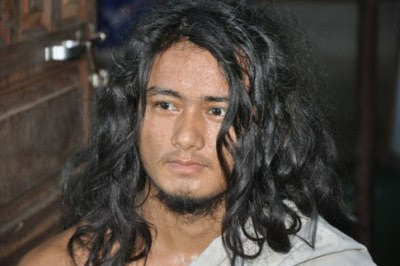 PATHLAIYA, Nepal. July, 2012. Ram Bahadur Banjam, the Buddha-boy, now a buddha-guy, preacher of peace, who claims to be meditating over five years, the last two years has appeared in the headlines for reasons completely incompatible with the religious philosophy he professes. The boy is involved in episodic marked by violence.

Having - even a committee / organization that represents him, the Bodhi Dharma Sangh Shrawan, their supporters and some member of his family have takencriminal initiatives.

In April this year (2012), his followers, were charged of practice of private imprisonment against two women: a nepalese, Mata-Anni of Sindhupalchowk and a Slovakian (she was identified only as Marichi, 35 years) - for three months!

Two Banjam brothers (Ganga Bahadur or Gangajet and Dil Bahadur) saw the case in televison and run to help the women.

The own young guru did put an end to the situation when he learned about what was occurred and more, that the captors were sexually harassing women on a local in the forest of Halkhoriya. Armed with a sword, he went to the place.

There, the Buddha enraged, did beat in the criminals, among them Darshan Subba Limbu (Foon Chok) an attendant of the guru. All ended up in police station and were released on the morning of April 3 (2012). *

* HERE IN bold - corrections of this article made by Marichi (information in comments). This writer apologizes for the errors and informs that such errors were contained in the numerous sources consulted to understand the case. Thank Marichi and I invite whoever else wants to correct this blog, to do it. I also ask  Marichi that forgive delay in answer and corrections, I never imagined that she or someone would read this blog. For more quick fixes send email to ligiacabus@uol.com.br with subject: BLOG CORRECTION

The case surrounded by contradictions account with disparate versions: a sister of the guru says her brothers believe that the unruly behavior of some followers (referring to the women that were captives) is tarnishing the reputation of the master.

The mother of Ram (the buddha-guy), Mayadevi (yes, namesake of the mother of Sakyamuni Buddha, Siddhartha Gautama), came into the forest accompanied by the daughters but she said that the holy son did beat in one of the girls, Asali Lama. She said that were there to "liberate the brothers who were being punished by the guru".

POLICE. The police was called (by followers) against Ram Banjam and, arriving in jungle Halkhoriya, seeing the situation, the policemen made reverences before the guru, leaving those who were beaten rebels.

FAMILY. The relations of Ram Bahadur Banjam with his family deteriorated. One of his sisters, Raj Kumari told the media that the young prefer to stay far from family and began to "raise their voice" against the excesses of the organization Bodhi Dharma Sangh Shrawan.

However, the major part of the family of Banjam was also contrary to the forced prision of the two women (except the marginal brothers), despite some, the mother and sisters having tried to defend those who participated in the episode when they they were being severely punished with beatings.

THE WOMEN. The followers of the guru that were responsible for the captivity of the two women argued that they were practicing witchcraft and were disturbing the meditation of the Enlightened. The association Bodhi Dharma Sangh presents itself like responsible for ensuring the welfare and protection of the master. Medical reports indicated that the slovak, Marichi, had his hand broken, bruises and was traumatized physically and mentally.

Marichi came to Nepal for about a year he joined a monastery in Simara. During this time she insisted encontar Banjam Ram. The harassment would have motivated the actions of members of the association Shrawan Bodhi Dharma Sangh.(It's clear that this association has to be dissolved or declared out of law) 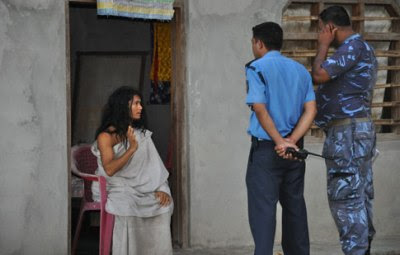 MANAHARWA. JULHO, 2010. Ram Bahadur Banjam, 20 years old (2010), which became known worldwide as the buddhaboy, lost his head with the impertinence of 17 men in the forest of Halkhoriya. Accusing them of deliberately try to sabotage his meditation, the young mystic, with the help of an adept, breaking to Buddhist principles, in an unusual attitude - beated in them, according to the complainants, using an ax handle.

When the men managed to escape, they sought medical help in Kalaiya, where they received analgesics and tetanus vaccine. Pralhad Chaudhary, one of the wounded, made a formal complaint to the police. The association's president Shrawan Bodhi Dharma Sangh, which is intended to represent the Buddha-guy confirmed that these people were determined to disrupt the meditation of the guru.

Banjam told officers confronted him that not done anything wrong and argued: Does a tapaswee (wise in meditating) goes to court? I respect the laws, but only the right ones. There are wrong laws, too. They tried to bully me. I was forced to punish them. And I have not used an ax handle, I used only my hands and only two or three times. They lie.  (Really, 17 men against one boy and his friend. Bloody hell! That is a powerful meditation!)

However, one of the victims had head trauma. The Iluminated-boy still explained: I granted respite while they smoked and made noise, but they went up on deck where I was meditating. What I did (beat in the men) I don't did with anger. I do everything with a smile. I was obliged to punish them.

In November 2010, Ram Bahadur Banjam protested to prevent the sacrifice of animals in the Gadhimai Festival but he considers that his mission failed; managed to save only 20,000 when typically are sacrificed hundreds of thousands of creatures.