Two suns in the UK sky

UK. This is posted in You Tube. Was filmed in may, 12 of 2012. At UK, two suns divided the space in the sky. The sun of every day, surrounded in clouds, appeared to be accompanied by another orb, of which emanates a red very bright light. One more of the heavenly mysteries that become more frequent and, increasingly, are registered by the cameras of this Third Millennium AD. 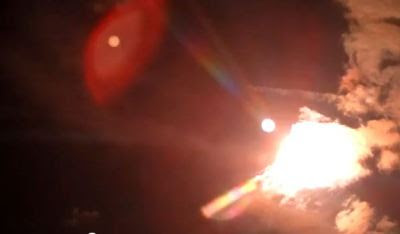 Almost always, numerous people who consider this kind of image mere photographic trick though, the Time of the two suns was predicted by many prophets and, today, researchers from emerging sciences such as archeology and history of the extraterrestrial are not suprise with this phenomenon.

As the precursor of these studies, the philologist of ancient languages​​, Zecharia Sitchin (expert in cuneiform, form of writing, Ancient Mesopotamia), many scholars and other stakeholders believe that the phenomenon of two suns are confirmation of the cyclic rapprochement of Nibiru, the mysterious planet which supposedly in the remote past, promoted the development of human species and the colonization of Earth.