FOXP2 - The Extraterrestrial Gene of the Starchild 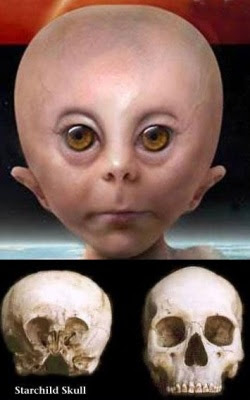 Graphic reconstruction of the creature's appearance

STARCHILD. By this expression stood known the mysterious skull found in Mexico in 1930 in a region called Cooper Canyon by a north-american teenager girl who was on vacation with his family in that country.
The skull was discovered in a tunnel of an old mine in the middle of a pile of debris, rublles. It was not an isolated piece. It was a complete skeleton that fell apart at the touch of the girl. And there were others.

That day she took only two skulls. There was no time to recover the rest. Everything was dispersed by a heavy rain of which, waters flow, washed the cavity. Both objects have become only bizarre memories of a travel. The exemplars remained stored in a box. In early 1990, her discoverer, already an elderly woman, died.
The pieces - then - were passed to the hands of Ray and Malanie Young, of El Paso - Texas, USA. For more than eight decades the question remained an enigma. Human or not? At the epoch in what he was exposed to the public - immediately - attracted the attention of onlookers and scholars.

The reason is obvious: the abnormal shape, humanoid - yes - but not-human or, at least, something abnormal. Many began to say that the skull was proof of the presence of aliens in the past history of the planet.

However, this conclusion was never enough to sustain the idea that the piece belonged to a extraterrestrial being. During all these years, academic scientists have fled of this hypothesis with the argument that the vagaries of nature are unimaginable. The Starchild skull would be, after all - only the result of genetic an abnomalia, but certainly, human.
Over the past thirteen years the fossil was analyzed in detail. A project was created for the study of the case, the called "Starchild Project". Now, the technology of DNA analysis could to provide an answer. And it gave
Scientists geneticists, who working on the project - identified the fragment of a gene - that was named FOXP2. The discovery of this gene give credibility to the hypothesis that the skull belongs, in fact, an alien being. An extraterrestrial.

The FOXP2 does not belong to the human genome. The acceptance of this discovery by the scientific community can establish that the Starchild is one of the greatest discoveries of this Civilization.

DETAILS
Many special features make of Starchild an object truly extraordinary Some features are notable: the occular orbitals very large, the nostrils very small, the anomalous shape of the skull. Other features, however, only appear in more specific tests: the bones are much stronger than those of an ordinary human being, are richer in minerals and, in spite of its size (and name), Starchild was not a child when died, it was an adult.
STARCHILD PROJECT
The skull that causes so much controversy has a project and a website dedicated to publishing information about it. In the homepage is written, for example, that the fossil has an age of approximately 900 years old, a conclusion obtained by the method of carbon-14. The test was held at the University of California at Riverside
The project, which began as an informal initiative, has existed since 1999. Its founders are Malanie and Ray Young, who became owners of the object. They hired the scientist Anthony Lloyd Pye (American, born in 1946) to head the research team. On the site can to be found: the history of the discovery, details of the research and numerous videos about the issue, pictures, graphic reconstructions of the creature's appearance, etc..