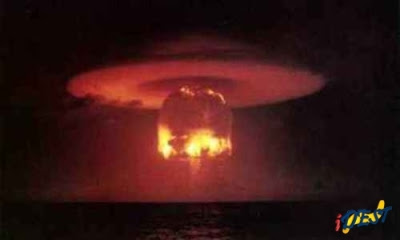 BRAZIL, state of Mato Grosso do Sul. Near the city of Vincentina, during one of the many storms that recently fell on Itamarati Settlement Area, residents were startled when, during the night, a strange natural phenomenon occurred. A large cloud appeared illuminating the sky. It was red. It was emitting bright sparks, flaming and had unusual shape.
The visual effect is - really, extraordinary. But it is only an electrical phenomenon that occurs well above the earth and can be perceived at night when a storm is on the distant horizon. These occurrences are called by various names: red sprites, elves, blue jets, gnomes and pixies.
The red sprites explode in the clouds after emit a powerful electric charge in direction to the earth. The weak flares can spread for miles reaching the atmosphere there about 95 kilometers high.
They use to have tube the format or jellyfish, with thin blue rings under them. At its highest point, they can form lightning-shaped disc called "sprite halos." The color red is produced by the ionized nitrogen, the most common gas in the atmosphere. The Sprites can be saw only by milliseconds. Blue jets erupt on top of the core of a storm - the most electrically active region. Cones of narrow are formed and disappear there about 40 km in height
SOURCE: Moradores do Assentamento Itamarati se assustam com fenômeno da natureza.
IDEST/Vicentina, published in 04/03/2012
[http://www.idest.com.br/noticia.asp?id=34214]