The gift of clairvoyance of the priest Marcelo Rossi 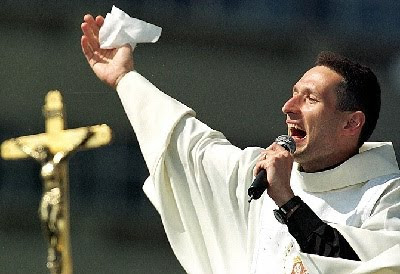 SANTO ANDRÉ city, SÃO PAULO – The catholic priest Marcelo Rossi is a clairvoyant! Or, better saying, a prophet. In Santo André city, in an interview to Quem magazine, the priest himself has declared that realy has this gift. It happens during autograph session for his newly released book: Agape. The book is already best-seller in Brazil with more than one and a half million copies sold. Another success Marcelo Rossi.
Born in São Paulo state in 1967, Marcelo Mendonça Rossi graduated himself in Physical Education with 22 years. Soon after, he decided to devote his life to the Christian Catholic priesthood. He was ordained priest in 1994, at age 27.
In his formation, he was strongly influenced by the Charismatic Renewal movement-Catholic Christian. In his masses, he adopted modern chants and dances. His preaching has a mystical tone and with a strong emphasis on the powers of the Holy Spirit. Thus, priest Marcelo Rossi became a phenomenon of popularity in the mass media: he appears in television, movies, in CDs, books and DVs. His personality is of someone who always stays youthful
About prophetic gift he tells: I'm not clairvoyant, God shows. He compares his gift with what occurs in a TV series: The Dead Zone. I touch the person and I begin to see the images, things that will happen.
It can arises at any time like during in a prayer. I am always loath, I try not to say anything to anyone. When I'm putting my hands (in a person), I am praying for her. I touch on people and, then, I see what will happen. If it's good that I'm seeing, I say. If it is bad I say nothing and I beg the God mercy. I always worry about pregnant women, for example.
The priest advises pregnant women not to announce the pregnancy until they complete the third month. More than 20 thousands cases of women who experienced pregnancy interrupted received the advice of the priest. The reason is to avoid the envy that Rossi belives to be a very dangerous destructive energy in this first period of pregnancy.
SOURCES
Padre Marcelo Rossi diz que pode prever futuro tocando pessoas.
IN Alagoas 24 Horas – published in 12/29/2010
[http://www.alagoas24horas.com.br/conteudo/?vCod=98102]
Padre Marcelo Rossi: Toco nas pessoas e vejo o que vai acontecer.
IN Revista Quem – published in 12/30/2010
[http://revistaquem.globo.com/Revista/Quem/0,,EMI198358-8219,00-TOCO+NAS+PESSOAS+E+VEJO+O+QUE+VAI+ACONTECER.html]