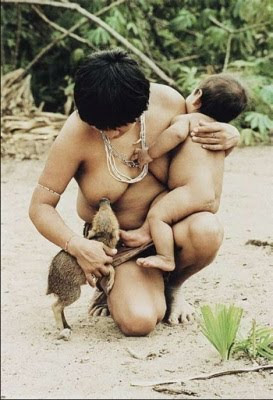 MARANHÃO – In the northwestern of Maranhao state, live the Awa-Guajá, one of the last nomadic tribes in the Americas. Its proximity to nature is so intense that the indigenous women breastfeed babies ape orphans. They tend also to adopt orphans of agoutis (Dasyprocta aguti) that are fed with the fruit of the babassu. (And, no. The Indigenous women don't have the practice of breast-feed the agoutis. This, only once a while... Photo) When animals begin to grow, when they are able to survive alone, are returned to the forest.
The danger most feared by the Awa-Guajá is contact with the white man. To find gunmen, loggers, squatters, or even a harmless white. White men, aggressive or not are synonymous with disease. So even those who live in villages spend most of their time in the woods. This is not a difficulty, since they are nomadic in their essential culture.