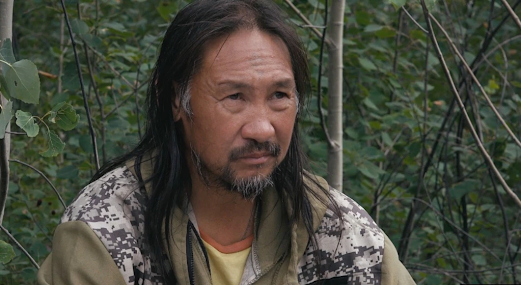 Alexander Gabyshev (Александр Габышев), 52 YEARS OLD (in 2021, born in 1958 - DAILY MAIL, 2019), a former welder, plumber and carpenter adopted shamanism in the tradition of his people, the Sakha, along the last decade after the death of his wife. He said he lived as a hermit in the Siberian forest for over two years.
Thursday, September 19, 2021 Alexander Gabyshev, 52 (in 2021) from the Republic of Sakha, resident of the city of Yakutsk, who introduces himself as a Siberian shaman-warrior was arrested by security forces during his march mystique to Moscow, on foot - a distance of 8,000 kilometers.
At capital, he planed to liberate the nation through a simple procedure: the shaman states that it is necessary to perform an exorcism ritual in the president of Vladimir Putin or, in his expression: "purge" the president still in 2021.
Gabyshev's diagnosis means, shamanically speaking, that the president must be exorcised for the good of the country. Gabyshev is declaring that the person of the mandatary is possessed by a demon. It means that Russia is being ruled by a dark entity that is "inkizilating" (inquizilando in portuguese-Brazil)- operating with negative energies - across the national territory. With the adherence of many to the cause, Alexander Gabyshev started his journey in March.
In July (2019), when he arrived in the city of Chita (Чита), speaking to about 700 people under the motto "Russia without Putin!" - the shaman said: "God told me that Putin is possessed by a demon that I must cast out. That's why I'm walking to there, to cast out the demon. At first I'll try with peaceful methods, like gatherings of people and rallies. If does not happen by peaceful means, there will be others".
"The objective of what I'm doing is to create a different Russia, which must be young, new and open to the world. Power has to be with the local communities, everyone has to be equal. It's time to create a new history of planet Earth." (Almost can hear: "Build Back Better")
The exorcism would consist of lighting a fire near the Kremlin wall in Red Square and burning horsehair and fermented mare's milk. The process will also involve beating a leather drum and saying a prayer, he reported to the New York Times.
POLICE 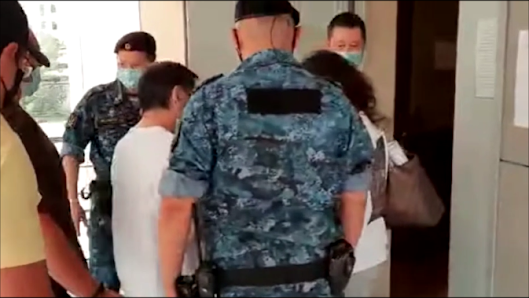 The authorities didn't like it... The Russians, despite the long time of official atheist politics, and especially those belonging to the "Zelites", have an extremely strong culture of beliefs rooted in magic and in all sorts of supernatural phenomena (visions, telepathy , telekinetics, apparitions of strange beings, sorcery etc.).
Alexander Gabyshev had already walked about 3,000 kilometers, six months since his departure, when he was arrested. Along the way, walking through the streets, in the villages, talking to folk, the shaman attracted the attention of many people, supporters and, finally, followers who joined the march towards Moscow making many selfies.
It was not the first encounter with "the lawmen": in early September - 2019, several of their supporters were arrested in Ulan-Ude and two cars used ​​in the march were confiscated. Protests against the arrests in Ulan-Ude began on September 9 but, were dispersed by police three days later.
AT DAWN on September 19, 2019 - about 50 masked agents, some in uniform, others in plain clothes, masked, heavily armed with automatic rifles and truncheons, without warning, no hello: they invaded the shaman's camp, set up for overnight on  border between the Republic of Buryatia and the Irlutsk region.
The man was arrested and taken on a bus towards Ulan-Ude (capital of Buryatia). From there he was apparently boarded a plane and shipped to his hometown of Yakutsk in Russia's Far East.
At Yakutsk, in the competent court for the process that was brought against the citizen, the shaman was accused of a crime: organizing an extremist movement. At the end of the "checks" Alexander Gabyshev was declared "crazy" by psychiatric evaluators.
Their lawyers say the Federal Security Service, the KGB's successor, informed them, last week, that their client needed psychiatric treatment (NTYIMES, 09OCT2019).
“This is very scary – what we were really afraid” said one of the lawyers, Boris Andreyev.
The ⁉ de Gabyshev team (Oxxxxx, the humble shaman has staff ) claims they will fight the attempt to commit him, a process that could take months. In the meantime, he is under orders not to leave Yakutsk.
AMNESTY INTERNATIONAL
The Shaman's arrest mobilized "public opinion" - that is, the NGOs and "Foundations" that hijack spontaneous popular initiatives and turn them into advertising campaigns of controlled political opposition in the service of stateless "owners of the world", today clearly identified as globalists, the same ones who are implementing the New World of Hell with all its evil implications for Humanity. 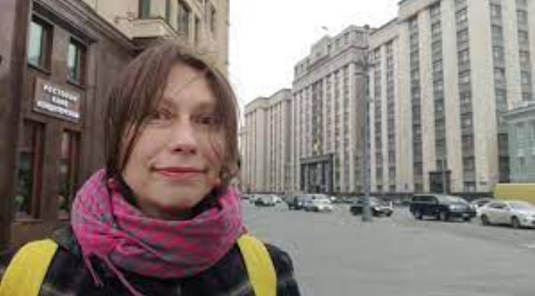 Amnesty International (Amnesty International, an NGO active in more than 70 countries) was called in and spoke out. The Director of the NGO in Russia, Natalia Zviagina (pictured above), said:
“The shaman's actions may be eccentric, but the response from Russian authorities is grotesque. Are they really afraid of your magical powers? Aleksandr Gabyshev must be free to express his political opinions and exercise his religion like anyone else.
“What appears to be a story of Russian folklore has become, in today's Russia, just another act of brutal suppression of human rights. Since Aleksandr Gabyshev began his epic journey, he has committed no crime and his detention is arbitrary and could amount to a forced disappearance.
“Russian authorities must reveal Aleksandr Gabyshev's fate and whereabouts and release him immediately and unconditionally. He is a prisoner of conscience deprived of liberty solely for peacefully exercising his rights to freedom of expression and assembly.”
HOSPICE 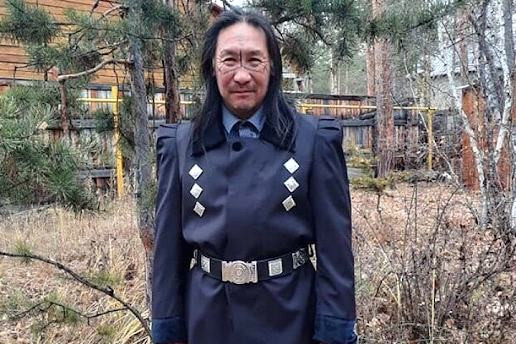 But, the amnesty did not happen. The shaman was reported as having been disturbed by his judgment and remained in the psychiatric hospital. Since then, their behavior has been contradictory.
He was released from hospital for the first time under the recommendation to be treated at home and to go to the doctor for mandatory periodic reviews. He said he would start the walk again; then he declared that he gave up. He again declared a retake and was again taken to the asylum.
OCTOBER 11, 2019
Siberian shaman vows to resume 'Exorcism of Putin' journey after arrest for extremism:
"I fully felt the return of punitive medicine, the deceased USSR" .
In a video posted on YouTube on October 10, 2019 [https://www.youtube.com/watch?v=kmhdwCAfHWo]
29 JULY 2020
Siberian Shaman Gives Up Anti-Putin Crusade
After being released from the psychiatric asylum where he was committed by court order earlier this year, in a statement released by local media, Alexander Gabyshev said he wanted to focus on his health and personal life. "To get my health in order, I have to live on my own now..." he said. "I'll take care of my teeth, put my documents in order and think about working in the future."
JANUARY 15, 2021
In January 2021, the Shaman changed his mind once more and began to announce plans to resume his crusade to “exorcise” Putin. He gave interviews; openly commented on the fact in his group on Telegram.
"Yakut shaman Alexander Gabyshev plans to start a new trip to Moscow in March 2021. He announced this in an interview with Sibir.Realii's newsroom, noting that he intends to "ride a white horse through the ancestral lands - in Yakutia, and then arrive to Irkutsk..."
On the occasion of this report, a special group on the Telegram app, the shaman's supporters discuss his political program. He agreed to give an interview only to this group. Some excerpts from the conversation below: (Integrated in the link
▶  Сибирь.Реалии - SIBERIA REALIDADES, 2021 ) :
Q: The first attempt to march to the Kremlin failed. Do you think the second time will be allowed to reach Moscow?
S - Don't be afraid. Wrong time, wrong circumstances. Courage will move mountains. I'm not afraid. Maybe tomorrow (which is very likely) they will take me and kill me. I am ready for this. Yes, I think they're going to try to kill him, because he didn't want to obey and he didn't shut up.
Q - What is your goal this time?
S - The objective remains the same: reach Moscow, the Kremlin, to fight there against the dark forces, with evil spirits in power. According to the forecast, we will be able to bring down the devil, and for that we will.
P - The last news from you was at the end of July, after the second involuntary hospitalization, when you were discharged. You said then that you want to take care of your health, think about work, "live your life." It can be understood as if you had abandoned the idea of ​​going to Moscow. Have you changed your mind now? What happened? What do you want from a new walk?
S - Yes, at the beginning I said: "That's it, I'm not going to pilgrimage anymore" and things like that. But you forget that I am a celestial warrior and the art of war is no stranger to me. You have to apply a lot to win a battle, folks.
Q - Who will accompany you? Do you communicate with anyone on your team, how are they, will they join?
S - In the campaign I will be accompanied by my detachment; and not just mine. There will be many volunteers. I communicate, of course, but now I'm sitting, I'm talking. The rest are still missing, waiting backstage. When the walk starts, everyone will appear.
Q - Why on a white horse and chariots, and not on foot, as before?
X - White for me is a symbol of purity of thought, a symbol of freedom, a symbol of truth. Why - on horseback? Because it's faster that way. (Laughter) I won't have time to walk now.
And why not by car? because I, as a shaman, a spiritual person, must not lose contact with Mother Earth. It energizes me. Well, by car, train, plane - after victory I will run over.
Q - Do you need to be in the Kremlin by a certain date?
S - Yes, as a shaman I was told that the devil will be overthrown in August 2021. I never hid that date. Of course, there is no time to reach it on foot...
Bien, THE PROPHECY OF THE SHAMAN has already given "xabu" (black screen). It is October 2021 and Mr. Putin is still at his post...
JANUARY 28, 2021
The hospital he was admitted to announced on its website that Gabyshev was placed in involuntary confinement because he failed to attend a monthly check-up. According to a statement from the Yakutsk regional psychiatric hospital:
“If a patient in need of active follow-up refuses to continue treatment [...] doctors visit the patient's home. When the patient refuses to open the door, the police have an obligation to help health professionals. The patient is currently under the supervision of clinicians.”
HIDDEN FORCES 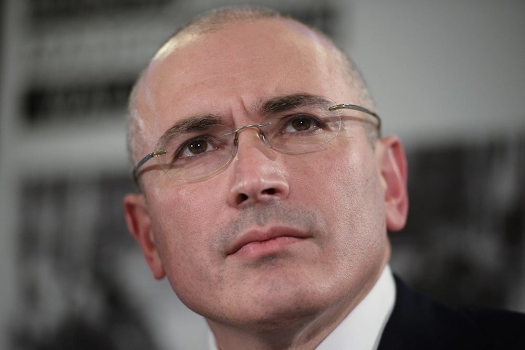 Mikhail Khodorkovsky, nowadays in exile and residing in London, has provided a veritable marketing team for action: within a few months the humble shaman has a team of professionals including lawyers and Facebook and Instagram outreach pages.
After the last internment, Alexei Pryanishnikov - coordinator of the legal advice of the human rights group Open Russia - the office Pravozashchita Otkrytki - which follows the case of the shaman, told AFP that the forced internment is "another attempt by public security agencies to prevent Gabyshev's trip to Moscow". One of the lawyers working in the cause of the "exorcist" is Boris Andreyev (THE NEW INDIA EXPRESS, 2021).
At this point in the "saga" it can be seen that Alexander Gabyshev's cause has been "monitored" by professional political agents who are openly against the government of Vladimir Putin. This explains the dissemination of the case, the rallies held in a public square with the shaman speaking to the people through microphones installed on stands.