RUSSIA. Chelyabinsk Oblast. In Sosnovsky district, an area nearby forest of the village of Sadovym, for some unknown reason - appeared completely bowed, curved.

Many trees seem that have were plucked by the roots and their trunks were arranged horizontally. Some, which remain rooted although they have been affected, are still alive and keeping their growth cycles. 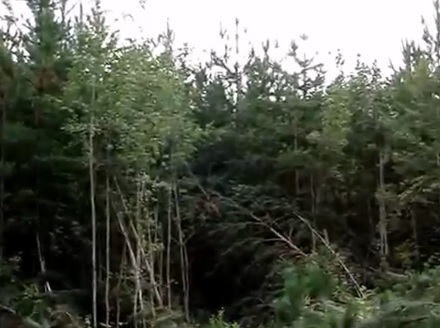 The anomaly in the woods reaches an area that reaches 150 m² (m-saquare) and its perimeter is rectangular.

Pines with 10 to 15 years, vines, poplars, alder bushes (Glutinous Alnus), all this vegetation was bent even the ground without apparent cause. The forest surrounding the area remains untouched.

The phenomenon was discovered by a local historian, Yuri Zavyalov. In research about the cause of the strange formation, Zavyalov and other scholars have dismissed assumptions as extreme weather phenomena, such as a sudden pressure drop, exposure to strong winds well as the fall of some celestial body, incidence of lightning or human interference.

This specific part of the forest seems to have been hit by some kind of limited energetic power. So far (July 2015), the anomalous glade is an enigma. More one unexplained phenomenon  in the history of riddles of Chelyabinsk region.