Biblical. A Giant Cloud of Grasshoppers is Devastating the Argentine Crop fields

A devastating horde - of grasshoppers - which is decimating the fields of Argentina - 'The Cloud, is going to the northeast of the province of Santiago del Estero.

ARGENTINA. PROVÍNCIA DE SANTIAGO DEL ESTERO. The swarm of locusts is destroying the production of an important agricultural area of the province and in the horticulture sector, for example, losses are disastrous.

According to a survey conducted by the Dirección de Agricultura Provincial (Provincial Directorate of Agriculture), the phenomenon has affected the department of Bamda, Robles, Figueroa, Beltrán, Vilmer, Villa Hippolyta, Colonia El Simbolar, Colonia Jaime, Forres and other locations. 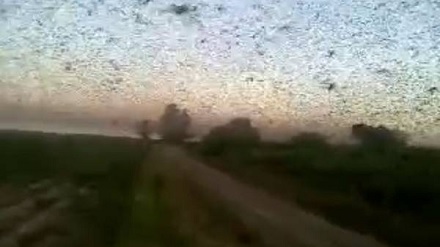 The species of locusts is not strange tothe  regional enviroment. Rather, it is common in the province: it is of the species called 'schitocerca.

The environmental engineer Guillermo Brim commented the case: The locusts have erratic route. They change of direction according the wind direction. (And who determines the winds's direction nowadays?)

The plague has already ravaged more than fifteen hundred acres of crops of vegetables like alfalfa, onions and carrots.

BWN COMMENTS: The prognosis of lack of alfalfa, mainly - is a big worry because this vegetable is an essential ingredient for the good feeding of all the communists governments that are ruling South America after to have kidnapped  the countries, the work power and money  from the peoples of that continent..