+ INFO. Brazil is the largest Spirit nation of the world 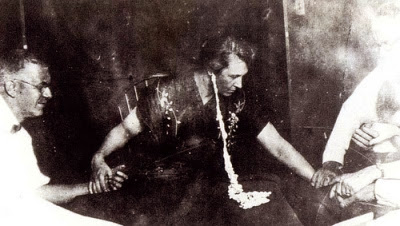 Mina "Margery" Crandon (1888–1941, more commonly known as Margery) is, perhaps, the most controversial medium in the history of Spiritualism. In her heyday, in the 1920’s, she spurred comments from some of the most noted Spiritualists and parapsychologists. n this photo, Ectoplasm is clearly seen emanating from Margery’s right ear.


THE QUESTION
HAVE YOU WITNESSED A TRUE DEMONIC POSSESSION?
IN UNEXPLAINED MYSTERIES FORUM
[http://www.unexplained-mysteries.com/forum/index.php?showtopic=264225&st=0]
Started by lisaloveslilia, Mar 25 2014

I am of the understanding that the members of this forum are from around the world.  I would like to hear, if possible, first hand accounts of this phenomena.  Or else I would like to hear your educated opinions of whether possession is possible or not. ... A coworker of mine, recently, told me a story about a fella he had known in his native country Yemen, [someone] that was showing all the "signs"...

Examples in my friend's tale...

1.  The "possessed" fella spoke English and never had before.
2.  He asked that a cigarette be placed on the window sill (unlit).  The cigarette allegedely ignited and this guy (across the room) blew smoke out of his mouth.
3.  The possessed fella loosened the lug nuts of a semi trailer truck with his bare hands and removed said tire and threw it across the yard.
4.  The possessed fella was acting out of sorts...particularly nasty and mean, when ,before he had never been.
5.  Flies swarmed around him and he smelled like rotting flesh.

The case you reports here seems to be a genuine case of possession or, in kardecist spiritist terms, mediunity, a case of  "to receive" a spirit, incorporate a one (spirit). In the context of this douctrine, there isn't demons bot, only human or humanoid spirits of disembodied spirits of individuals, units of beings endowed with self-conscience. Or be - there isn't possession without mediunity and this means a psychological open door.

The signs of behavior that are cited are indeed typical of a situation of possession:

2. Desire for cigarettes, alcoholic beverages and other substances, drugs - that alter the state of consciousness well howcan occurs libido alterations.

A 'invasor spirit does not occupy the physical body, doesn't wears the meat but controls the possessed consciousness and its physical resources.


The 'magic of the lighted cigarette and the smoke being expelled by the medium/the possessed is possible because tehe possession don't consists, in fact that the invasor spirit enters in the body of someone but means, a bond, an involvement of auras. The involvement allows ignite the cigarette and expel the smoke that cannot be really a smoke, but a tiny cloud of ectoplasm.


3. Increased physical strength and violent senseless behavior, as a pure expression of hatred. Remember that spirits thatpractice possession are dominated by negative feelings and are suffering of mental disturbs which include hallucinations.

* The 'Physical Strength of those spirits does not come from muscle energy. It is a powerful development of psychokinesiscapacity. Be a troubled spirit does not imply having metaphysical faculties (or powers) anemic.

In Nature there isn't a moral by deserving - in relation to the physical and metaphysical power of a spirit, a person, an individual.

A spirit can be at the same time, dangerously disturbed and powerful in relation to spirits that, many times, are 'good persons butare also weak Egos, with their self-control (auto-possesion) in low development level - embodied or disembodied.

4. The smell of rotting flesh and the consequent result - the flies - is a strong sign of the presence - on-site - a disembodied in a low ethical level (or more than one) of Knowledge.

Also according to the Kardecism (and other traditions) - many disembodied spirits remain attached to the consumption of earthly substances, food, especially meat and by extension, the blood -.beverages, cigarettes etc. - this attachment, this desires can be the hell of many spirits.

Because in their spiritual bodies they don't have tactile conditions for directly consume of their passions, to eat, to smoke, to drink, to make sex. They depends from the embodied to consume what they still can to consume. The essences, the smells, the emanations of objects and persons, tastes, smells, the physical sensations.

Just as, according to tradition of Spiritist douctrine, the spiritual presence of the good, of the saints, is felt by the scent of flowers in a closed room (and no flowers, of course), unpleasant odors, especially blood and rotten meat are emited exalad by troubled spirits, tormented souls.

Because they have the smell that they absorb at places that they frequent; places like cemeteries or, even - the deep of their own sepultures - yes, but also the animals's slaughterhouses.