The strange Elemental from Cataluña 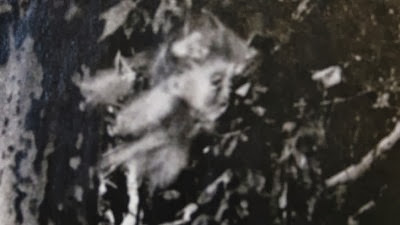 The image can be an optical illusion produced by interaction amid lights and shades of the environment. However, it is undeniable the sight of a strange and fluidic humanoid figure.

SPAIN. According to the beliefs of the people of Catalonia, the region's forests are inhabited by strange creatures.

For centuries, this idea was perpetuated as a pagan legend. However, recently, an image obtained and published by the magazine Mas Allá de la Ciencia (Spain - http://www.masalladelaciencia.es/] seems to be an amazing evidence of the existence of these mythical creatures.

The photo was captured by Jose Maria Ferrer, on a road between Centellas and Tona (Barcelona). Ferrer decided to send it to the section Ver Para Crer (some like To See to Believe) of that magazine.

However, as waited when it talks about the metaphysical or supernatural, there is controversy. While some technicians, as its Léon, do not rule out the possibility of a mere optical illusion, other people accept that the image could be, indeed, the record of a creature wgo don't belongs to the human level of the ordinary objective experience.

It can be a transcendental entity in moving between dimensions of reality. This is not the first time that these creatures (presumably) of fabulous Cataluña call the attention of the media. In 2009, gnomes were sighted in Valle de Rivas, at Pyrenees zone.

The technology advances in capture and disclosure of images by low cost devices, as camcorders and photographic cameras, currently, can be the explanation for the increase in number of records of the Invisible - that have been present at the midia's daily headlines.