THE MYSTERY OF THE... ALENIGENAS AT MEXICO

research, footages and photographs with references

HUMANOIDS. MEXICO. The belief in the clandestine presence, at Earth, of individuals belonging to non-human races, the theoric universe of humanoids who use incomprehensible energies and technologies of transportation and communication, these are ideas that, currently, occupy their own and vast cultural niche - covering since the emergence of new sciences - although, by many called false sciences - even a significative space  the fancy of popular imagery in global ambit.

The creatures sighted, filmed, photographed at different times and countries, these beings that some scholars point out, in the Middle Ages, have been identified as demons, elves, fairies - contemporaneously, are most often associated, in general terms, to the called ETs.

By certain way it was established in a simplification: these strangers are extraterrestrial. However, behind the generic label "alien" exist numerous beings already cataloged, physically very different, inspiring some other theories that go beyond the exogenous hypothesis: of the creature that comes out of the space.

Currently, there are and coexist numerous other hypotheses that, a priori, have admited that not all humanoid aliens images that have been caught by the cameras of the world are necessarily of creatures  other planets. Among the alternative hypotheses are:

- the hypothesis of The Intraterrestrials, a civilization, some Race or, even, Races of humanoids, underground's inhabitants. Among these Races could be included the reptilians, much known because often, they have appeared in the midia - be in the ufologic news, be in fiction works of cinema and TV .

- The humanoids from other existential dimensions, that come from parallel universes, of other time slots; of the future, for example.

- The humanoids that are earthly entities but belong to other vibrational tracks of Reality, understood under different ways along the time: nature spirits, elementals, genies, like fairies, goblins and demons of Middle Age, for example. Among few other hypothesis.

The  image records of these humanoid beings are much rarer than the records of UFOs. Although these sightings and alien sightings, as well as UFO sightings occur around the world, in some countries there is a tradition rooted, more documents or a greater zeal in relation to records. It is the case of Russia, for example.

In Latin America, some years ago,  the number of recorded images of these aliens has increased at Mexico and Argentina. In both countries, ufology and exobiology arouse great interest among scholars, academics and amateurs from different areas of science, as well as among the general public and in the midia.

UFOs and their alleged occupants are always in the headlines at America of Hispanic language, as happened recently (late 2012), with the strange luminous and cylindrical object - that was filmed, in different days, entering and leaving of the volcano Popocatepetl's crater in midlle of a furious eruption.

In fact, at Mexico, there are an ufologic traditions which, currently, is upgraded and mixed with the old animist beliefs that linked the geological phenomena of volcanism - in the region - with gods.

Legends that talk of  UFOs,  always near the volcanoes and of the huge volcanic mountains because in these places, an advanced Race of intraterrestrials humanoids work in the extraction of energetic raw material.

Moreover, even according the traditions, many of these volcanoes and mountains have gates to another world, to another humanity,  where live the  underground Breeds of mythological Hollow Earth.

The humanoids are seen with some frequency and have been photographed and filmed in the woods surrounding volcanoes and other mountains.

While researchers examine the images and cogitate between earthlings or not, many residents of small towns and villages - where these sightings occurred where records were made - those people, simplest, understand these creatures as old acquaintances of the local culture: magical beings, guardians of nature, of trees, of the great rocks, as the Peña de Lobos, of volcanoes, as the Popocatepetl.


RECORDS OF HUMANOID-ALIENS IN MEXICO
with references 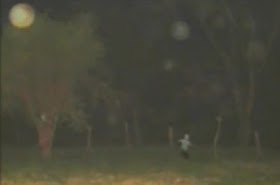 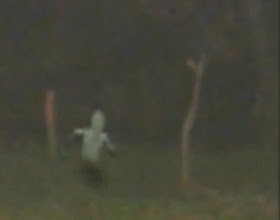 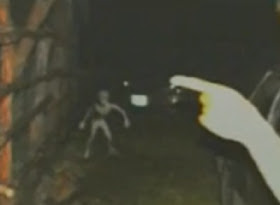 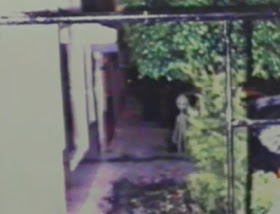 BELOW: CITY OF JUAREZ, CHIHUAHUA state. MAY 2004. (MAUSSAN, 2005 - Parte 2) the record sent to the researcher - in condition of anonymity - by the young man who appears on photo who claimed: he feared being ridiculed. 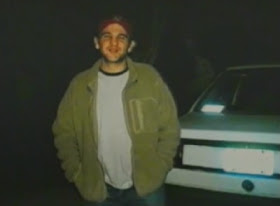 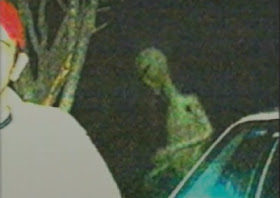 2006. In the frames below, the creature appears in the video presented by Jaime Maussan (nearly 6 minutes long), near the Lake Azteca (in the region of the namesake Reserve). The reportage was realized in 2006 by Gilda Estrada and Sergio Garcia, investigators of paranormal phenomena. 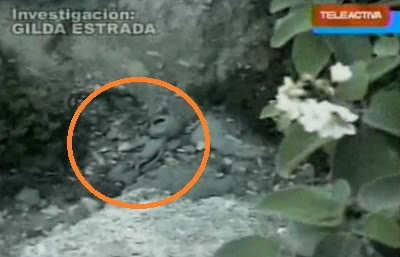 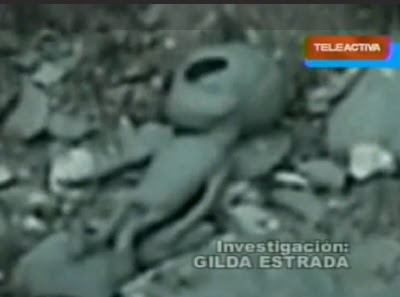 The reporters investigators were called by the nearby residents who reported sightings of a small humanoid being who was saw moving with difficulty, dragging itself on the ground as if injured. Arriving on the scene of events, the journalists were surprised by finding the scene, that was recorded on video.

Gilda Estrada also said in a interview about the episode, that staying in the place was almost impossible due to a strong and unpleasant odor of sulfur, which seemed to emanate from humanoid.

Judging that the creature was dead, Estrada and her partner, Sergio Garcia - decided to return to the city to get some suitable material for the rescue of the body (a container, gloves, and plastics) and, by this way,  avoid direct contact with the unknown organism and thus any microbiological contamination between species (human-alien).

However, when they returned to the site, already was night the body was gone what raises two possibilities: the humanoid was alive and managed to escape, left the place; or, dead or not, someone, perhaps other of its race - rescued the mate. 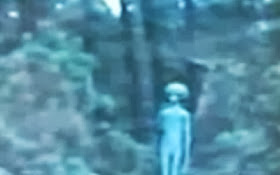 Photograph of a gray humanoid in Peña de Lobos. In the region the folk says that these beings have lived in the woods for many generations. They have appeared after an unidentified flying object crashed in the area. The incident is so ancient, happened there is so much time  that its narrative has already been incorporated into the collection of local legends.

Traditional scenario of paranormal events, Peña de Lobos is one of countless postcards of Mexico fantastic face. It is a place of many stories: between legends and rumors, there is a body of beliefs more or less folkloric that includes from magical beings, transdimensional, guardians of the groves until the most recent characters from the popular imagination, the strange, alien humanoids: intraterrestrials, like many think - or extraterrestrials and their bright aircrafts crossing the sky around the summits of the mountains. 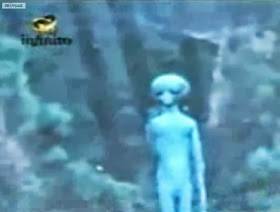 In a video (posted in internet on AUGUST 3, 2013) on the Channel of WEB-TV INFINITE - the host of the program Reality Point Zero, Adrian Moscoso Pacheco says he was searched by the producer of a radio program about paranormal and ufology, Carlos Javier Contreras - from the municipality of Jilotzingo.

Was Contreras who has shown the photo - of the creature, the Peña de Lobos's Gray - to Moscoso Pacheco. This, resolved to investigate the matter on the spot, the forest of Reserva Ambiental da Peña (Stone of Wolves environmental reserve).

According to Contreras, in the video that was posted on the Internet in August 2013, the displayed photo would have been obtained many years before, by a tourist, in 2011. 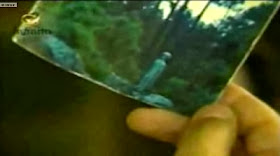 José Luis Silva, there 30 years owner of a complex of huts in the Reserve, appeared in the reportage and showed and the original photograph to journalists (6 minutes and 32 seconds of the video). He also claimed to have witnessed the sighting and described the creature and its movements . The being had fled when he realized he was being photographed (or observed).