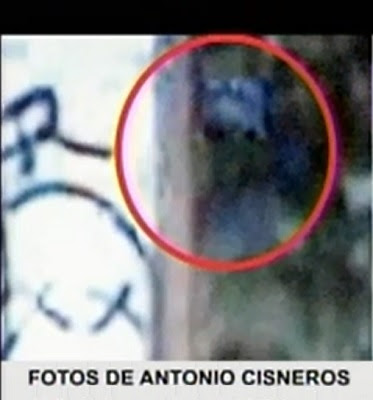 MEXICO. The  Program TV presenter and commentator of the insolit - Héctor Suárez Gomis, recognized the specimen above as belonging to the race Gris (greys).

The author of the photo, Antonio Cisneros is researcher in ufology and biology of non-human. Among ufologists he ins known like the Sky Watcher.

Cisneros accounted to the journalists  that this was not his first encounter with a humanoid (an alien, a strange being) in the vicinity of the volcano and on the edge of the crater.

On other occasion, he would be front in front with another humanoid type in the same region. Hearing the description of Cisneros,  Héctor Suárez Gomis identified this another with the reptilian race and a possible inhabitant intraterrestrial.

Many scholars belive that the called extraterrestrial, they can be earthlings, so much ancient creatures that could be living at the undergrounds of the planet there many milenia.

Antonio Cisneros is a recognized researcher in Ufology Vigilante one of Heaven, as some call it.