BRAZIL - The Mirrors of Heaven of Rondonia 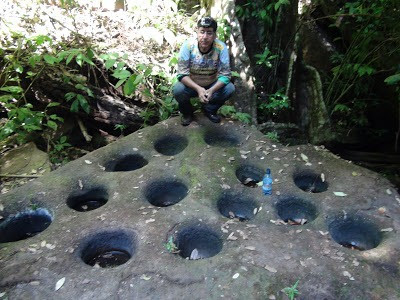 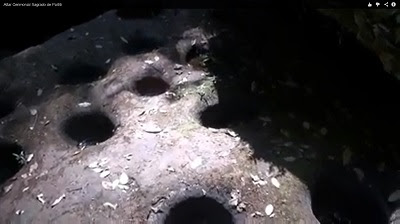 The found, that already was notified to the governamental authorities, shown to be an archaeological complex that includes, more than the Altar, residencial buildings, vast areas of planting, prepared, as agricultural terraces, funerary space and an enigmatic stone colossus, an elevation topographic with pyramidal form on top of which stands a figure zoomorphic which some identify as a giant condor. The native South Americans of western Amazon region call this place Huaca del Condor (below). 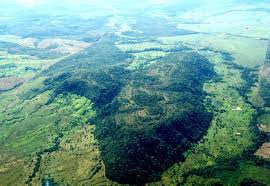 Since 2009, Joaquim Cunha Silva performs incursions in the region in search of geoglyphs and other cultural connections between the extreme northern Brazil and the peoples of the interior and the west coast of the continent, like the Andean and Arawak (Andinos and Aruaques).

The discovery of Paititi's Altar is, in deed, an important evidence of the close relations among the south-americans nations in a wide territory of this part of the continent, situated below Equator line.

Those kind of cavities on the rocks were found before in many countries of spanish Latin America, like Peru and Colombia - being the first, famous for its tradition to be the cradle of a great and mysterious civilization. According the Italian-Peruvian physicist and historical researcher Enrico Mattievich* :

The altar of Rondonia, with circular depressions dug into a huge stone slab, is very old and can be up to thousands of years... Several other stone altars were found ... I think these altars or "Mirror of Heaven" are related with the Kernos,  huge circular stone with 34 circular depressions found in the Palace of Malia, Crete, dedicated to the cult of fertility.

* ENRICO MATTIEVICH. Born in 1938 in the Italian city of Fiume, now Rijeka - Croatia. In 1949 he emigrated to Peru with her parents. He began his higher studies in Physics and Mathematics at the Universidad Nacional Mayor de San Marcos in Lima, where he was Professor of Experimental Physics. PhD in Physics, Brazilian Center for Physics Research, 1974. Researcher of Applied Physics in Mineralogy, Palaeontology and Archaeology in the Universidade Federal do Rio do Janeiro - UFRJ (Federal University of Rio de Janeiro). Author of Journey to the Mythological Inferno” - America’s Discovery by the Ancient Greeks - ROGEM PRESS, 2010.