POPOCATEPETL VOLCANO - THE HUMANOID FACE ON THE MOUNTAIN 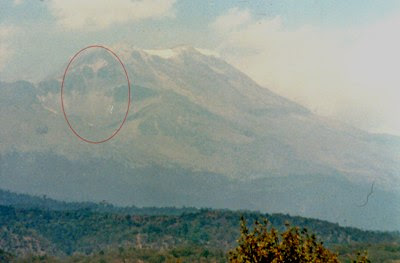 MEXICO. Near the volcano Popocatepetl, there is a mountain whose panoramic view allows to distinguish, on huge stone wall, a face whose features humanoid, inevitably, resembles the current representation of one of the races of non-human intelligent beings, with its big black eyes and tiny traces.

Locals claim that this glyph (petroglyph) isn't like other similar ancient monuments in the region but, appeared suddenly. a few years ago - (which dismisses a simple case of pareidolia or a shadow effect, well known,  characteristic of that place).

The Popocatepetl volcano, although be not the only - in the world - visited by UFOs is, arguably, one in which the occurrences of this type have attracted the attention of the midia since it has suffered (and continues manifesting in) violent eruptions between April and May 2012 and in October and November of that same year.

The convulsions don't have stoped. In the last three months of this year (2013) the Popocatepetl has showed intense activity projecting in atmosphere thick smoke columns and clouds of volcanic dust.