Astral Crimes, Abduction of Incarnated Spirits and Necrophagy at Zimbabwe 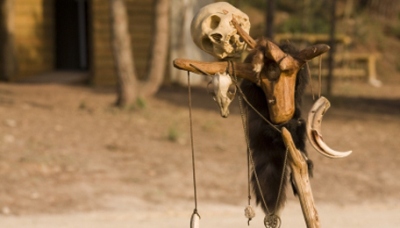 At Zimbabwe, more than 90% of people believe their lives are more or less affected by witchcraft.
ZIMBABWE. In Mashonaland Central province (north of country), in the small town of Gleendale - just over 12 500 inhabitants in 2012 * - the population is terrified: two girls from a local school revealed to have been recruited by a sect of practitioners black magic and have participated in rituals in which, tombs are violated and exhumed corpses are used in ceremonies of necrophagy.
* http://www.tageo.com/index-e-zi-v-03-d-m3189626.htm

In February of this year [2013], the case was taken to court where they were collected the testimonies of the girls.  According to the midia in Glendale (and other cities in Zimbabwe):

The two girls confirmed that the cult is formed by five adults. They were lured (or even abducted) at night by group members and were taken to participate in the practices of black magic. Were forced to drink human blood,  exhuming corpses and eating their flesh.

The village chief of the farm, Theresa May Mawadza (49 years in 2013) confirmed the confessions. The two girls (who attend, one - the 5th grade and the other, the second year of Secondary, thus, they are teenagers) ... told that the sect has (at least) five adult members. They are called - at night - by elderly persons whom drove them to participate in activities of witchcraft. They are forced to drink human blood, exhume graves and eat human flesh.


In their denounces, the youths said that they hear their names being called late at night and mysteriously find themselves, realize themselves in the company of two women who claim to be witches and a man who behaves like an assistant.

Moreover, an aspect absolutely unusual, the kind that reaches the border of the supernatural involves these episodes of abduction": the adolescents, while they were being approached, being still at home, perceiving themselves stand up, continued to be seen by his parents, sleeping in their beds in that period of the alleged absence. Thus, their parents don't realized the lack of them.

[These circunstances configure a kind of unusual kidnapping: kidnapping of the astral body and perisprit - the etheric double of human that, according esoterists, can move away from the physical body during the hours of sleep].

The younger girl, admitted that the astral absences are constant and declared that she is part of the group. In fact, says that accompanies the witches by their own free will. It refers to one of the older women as "the Granny".

She tells: ... I started to see three people overnight ̶ They said "Let's eat human flesh." I wanted to sneak me out of the house and follow them. When my partners ... are about to come pick me up, I start to feel dizzy and I get sleepy. Immediately they call my name and say: "Come on."

She tells: ... I started to see three people overnight ̶ They said "Let's eat human flesh." I wanted to sneak me out of the house and follow them. When my partners ... are about to come pick me up, I start to feel dizzy and I get sleepy. Immediately they call my name and say: "Come on."

I leave home crossing through the locked door. My mother can see me sleeping but I'm not there. They put me in front of the group and am I who drink human blood in the first place ...

When we got to the grave of our choice, I hit with a stick that I carry and the grave opens immediately. Then - we jump inside to remove the corpse out of the coffin and then eat the meat.

Our nails become strong and sharp. They seem to be knives. We eat but always we put the things in order in the grave. People never realize that the tomb was opened. (Then) ... We took a bit of meat for Gogo's house where she is put to dry.

Once, we opened a grave and smelled terrible. The meat was rotten but we eat all the meat. In majority of the times, the meat is fresh, of people who died recently. Am I who takes the remains to Gogo's house. (The nature or identity of this so called Gogo is a mistery).

The younger girl, admitted that the astral absences are constant and declared that she is part of the group. In fact, says that accompanies the witches by their own free will. It refers to one of the older women as "the Granny".

The investigation continues and the naturality with which those involved claim the most absurd connections with witchcraft most primitive is, in itself, an amazing thing, a kind of anthropological living fossil a culture absurdly anachronistic.

Intimateded to testify, a man aged 61 ̶ whose name was withheld by the reportage of the My Zimbabwe ̶ despite claiming to be the only male member of the sect, claims to have no knowledge of any ritual practiced in the company of children or anyone other person.

A traditional healer, summoned to serve as a consultant in the sessions of the Court revealed that the parents of the accused had inoculated witchcrafts of evil in that man's blood (kutemerwa Nyora) during his youth.

And the witness said: I personally do not know if I am involved in witchcraft. Maybe yes, unconsciously. If the "spirit of witchcraft" can be kicked out of me, I am willing to take this forward.

According to the girls, other children are part of the group and were recruited in the same way "metaphysical." The youngest is 3 years old.