The Climate Changes ... In Solar System 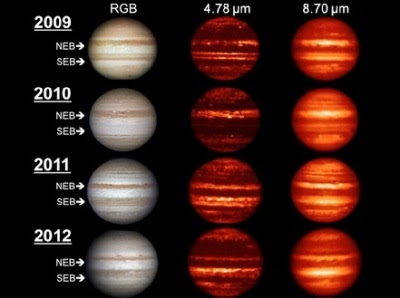 They argue that climate change is not related to human activities but with a process that is affecting the entire solar system. Among scholars, there aren't consensus nor about the warming. Some say that the temperature is increasing, others, affirm that is decreasing, in a process of cooling.

Many denounce that the theory of anthropogenic warming is a theory forged by the more developed nations of the world with the goal of implementing a global tax on carbon emissions, what would keep rising powers limited in their development by this artifice, that would be a brake for economic growth.

But the facts are indifferent to discussions. And the fact is that the astronomical data indicate climate changes throughout the solar system. Three recent examples illustrate the phenomenon. 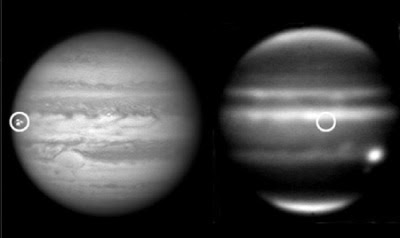 Jupiter has suffered more impacts over the past four years than astronomers already have observed along the timeline. On the image, the impact of a meteor, on 10 September 2012.
IMAGE: NASA / IRTF / JPL-Caltech / G. Hall / University of the Basque Country.

In 2009, astronomers observed the disappearance of a brown track south of Jupiter's equator. It reappeared in 2011. At the same time, the scientist Glenn Orton and his team, of Jet Propulsion Laboratory, NASA - discovered, this year (2012) - that the north equatorial belt became noticeably clearer rapidly, more than the same process occurring over a century.

At Jupiter - there are events that are happening for the first time and others which aren't seen for decades, said Orton. The scientific community has no explanation for what is happening on this planet. Some believe that the surprise is due to the fact that only recently appeared potent observation equipments, able to allow the observation of phenomena previously ignored. 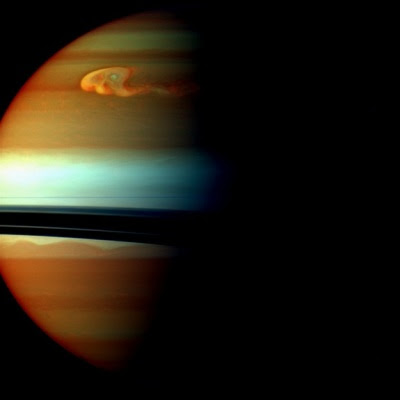 One Saturn's year equals 30 Earth years. The annual storm on that planet, which has been registered since 2010 but has started in August 2009 must lasts about seven Earth years. It is monstrous.

The image, taken by the Cassini spacecraft at the end of 2010, shows the layers of Saturn's atmosphere. The red and orange colors indicate lower clouds, closer to the surface of the globe. The tracks green and yellow are intermediate. 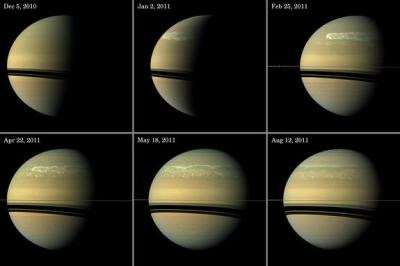 The evolution of the storm, and between 2010 and 2011. The "Great Storm of Saturn's Spring" has manifested itself two years ago as a giant vortex, formed by the merger of two large pockets of hot air. This vortex moves across the northern hemisphere of the planet since mid-2011. 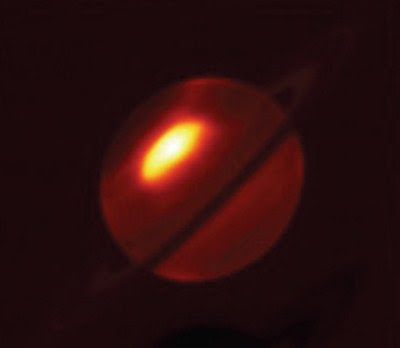 The anticyclone vortex - which formed in the stratosphere, that is low pressure zone - has about 62,000 km of diameter, almost a quarter of the circumference of Saturn.
IMAGE: VLT mid-infrared image of Saturn's giant vortex, em 20/07/2011. Leigh N. Fletcher, University of Oxford, UK, and ESO. IN [http://sci.esa.int/science-e/www/object/index.cfm?fobjectid=50997]

On Saturn, the Cassini probe, NASA - has monitored the consequences of a rare and monstrous storm. The data revealed a record of disturbances in the planet's atmosphere. The probe's infrared spectrometer registered an increase in temperature of 150 degrees Celsius above normal.

In the same period, scientists of Goddard Spaceflight Center (NASA), Greenbelt (USA, Maryland) - detected a large increase in the amount of ethylene gas whose origin is a mystery. The release of ethylene was confirmed by Celeste infra-red spectrometer (CIRS) at the McMath-Pierce installed Solar Telescope at Kitt Peak - Arizona (USA).

Scientists at Goddard, in the edition of November 20 (2011) of the Astrophysical Journal, describe an unprecedented energy emission. According Brigette Hesman, University of Maryland - who also works in Goddard - lead author of the study:

This temperature rise is almost unbelievable, especially in this part of Saturn's atmosphere [atmosphere upper outermost] which is normally very stable. The illustration of a change in temperature on the same scale on Earth it would be like going from the intense cold in Fairbanks's winter (Alaska) to the hottest summer of the Mojave Desert.

Detected by the first time in the northern hemisphere of Saturn on December 5, 2010, the storm became so great that a similar phenomenon on Earth, could involve completly this planet, many times. 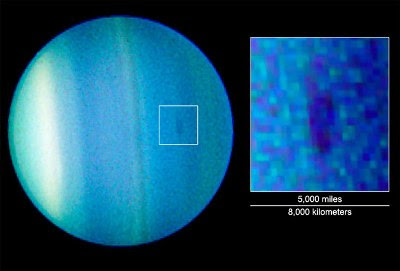 Fast winds and swirling clouds in the atmosphere of Uranus form a dark vortex large enough to swallow two thirds of the United States. Astronomers from the University of Wisconsin-Madison used the Hubble telescope, NASA - on August 23, 2006 - for obtain the first images of the dark stain of Uranus which measures 1.700 km wide by 3.000 km in length.

About Uranus, a study of an international team of scientists has revealed that currently the planet is swept by wind gusts reaching speeds exceeding 900 miles per hour. The finding surprised because when the Voyager probe passed by Uranus in 1986 showed a quiet landscape, without major changes.

The result of the research about the "celestial planet" (Uranus is the deity who personifies the sky in Greek mythology, father of Saturn or Chronos, the Time) - presented at the American Astronomical Society, showed new images obtained by a new technology implemented in the Keck Observatory, Hawaii.

These images revealed that the planet has a dense atmosphere, similar to the neighbor - Neptune, made mostly of hydrogen, helium and methane. The temperatures are low enough to freeze the methane, about 180° negative Celsius. The fast winds, which blow with orientation east-west, are an enigma for the researchers because they don't understand where does the energy required to produce them.

Heidi Hammel (American Astronomical Society) - explained that ... These images reveal an incredible complexity in the atmosphere of Uranus. We knew that the planet was active but not in this level.

Another scientist, Larry Scromovsky observed: Uranus is changing. There, the meteorological profile is showing a different behavior than had been detected until recently. The fundamental difference is the instability - what never was observed before.

On Earth changes are also globals. Glenn Orton (quoted above, in the begin of this article) - warns that ...these changes may end his life in this world or, at least, radically alter the ecosystem as it is configured now. One of the things that has sustained life at the Earth is its stable environment.

THIS NEWS IN PORTUGUESE
[http://sofadasala-noticias.blogspot.com.br/2012/10/as-mudancas-climaticas-do-sistema-solar.html]