Ghost Ship, UFOs and Other Mysteries of Sambomrombóm's bay 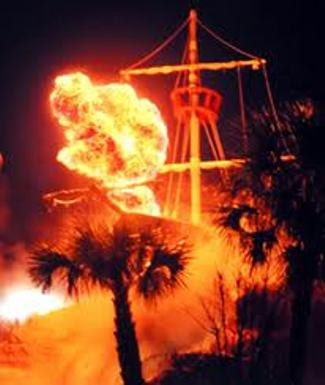 ARGENTINA. The province of Buenos Aires (not to confuse with the city),at the Bay of Samborombóm - for decades, has been the scenary of unexplained phenomena witnessed by visitors and locals: luminous spheres appear in the deep waters of the estuary of La Plata, disappearing of aircrafts and the spectral vision of a ghost ship in flames. 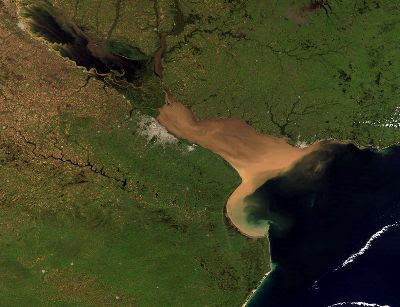 The ghost ship appears out of nowhere, sailing on the river towards the sea (Río de la Plata's mouth). One hears desperate screams, of terrified passengers and crew terrified. The vessel, clearly visible, in its appearances, is burning in flames and suddenly disappears, even though had be there only about 500 meters from shore.

In other occasions, luminous spheres are seen moving or still, unmoving for several minutes, in the deep of waters, indifferent to the observers of the phenomenon. Many of these reports are from anglers who frequent these waters.

In 2012, researchers from Argentina Fundacíon Ovnologia (FAO) - led by UFO researcher Luis Burgos, held a vigil at the site and they collected reports of witnesses.

In the archives of FAO exitem records of anomalies Samborombóm Bay that dating back to 1996 including the sighting of the spheres, not only in water but also in full flight in the nocturne sky when they emit an intense glow pink-orange. But the anomalies happen, there many years - well prior this date.

In June 1965, when the base of Punta Indio was under the command of Hugo Frontoth, a series of UFO sightings that were repeated for three weeks.

The signals detected by A radar GCA (Ground Controlled Approach-capable to monitor the airspace in a circumference with a radius of 80 km) mobilized militars. At the time, the Lt. Frederick Machain chased a UFO, at the aerial space of the city of Magdalena.

A Space Commission from U.S. technicians periciaram the electronic equipment searching for faults and anomalies; without result. Then, the Argentine Navy instituted a UFO Information Bureau (a special commission of inquiry) to monitor the events.

In November of 1968, in Punta Piedra Pipinas, Miguel Angel Fountrier and Hugo Bustamante found a strange circle formed by nine mushrooms, one of them, especially big, with 70 cm diameter and 30 cm high.

At dawn of April 5, 1983, the businessman Jorge Semacendi and his companion, Daniel Vera while were traveling by car on the road between La Plata and Villa Gesell, were chased closely by a small luminous sphere that ufologists call Tele-receptors probes.

Travelers attempted to escape persecution, accelerating the vehicle endangering their lives. But the object followed the car for about two hours covering a distance of about 200 km.

A few minutes later, the most surprising happened. A van with rear doors open, overtook the car of which headlights, allowed them to see, inside the cargo compartment, a strange and small device with discoid shape. 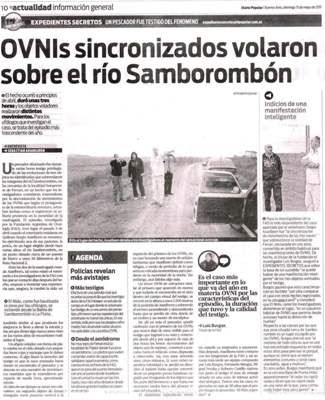 In January 2011, a Robinson 44 helicopter from the National Security Agency Vial (ANSV), piloted by Alejandro Ferloza, left the base of Colonel Bransden toward the Atlantic coast. He never reached his destination. In all cases of disappearance, none of the search teams and patrols that had investigated the area found any sign of the aircraft or wreckage.

Burgos (the ufologist quoted above) believes the unexplained phenomenons of Bay Sambrombóm are associated with the action of magnetic fields, described by Charles Berliz in The Mystery of the Bermuda Triangle, a book which lists 11 other places in the world where, as in the Bermuda Triangle, aircraft and boats disappear - swallowed by a mysterious agent.

THIS NEWS IN PORTUGUESE
[http://sofadasala-noticias.blogspot.com.br/2012/10/o-navio-fantasma-em-chamas-outros.html]