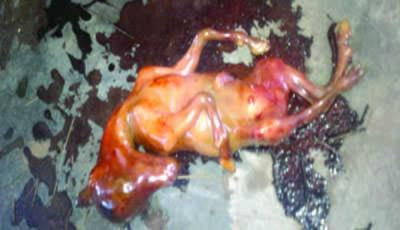 Baby-horse. The photo above is real and was obtained by one of the journalists who visited the church, according information of The Nation Online/Nigeria.

NIGERIA. According to the sources this news happened Tuesday, September 11 (2012), in Benin city, Edo state capital - Nigeria, Africa. A woman gave birth to a horse during a prayer meeting - called "Prophecy Programmes" - within an evangelical church - reported the supervisor of the Ministry of Mondial Liberation, the evangelist minister Iyamu Silva.

Although the local medical community be perplexed and denying vehemently the veracity and the possibility of a clinical fact of this type to happen, the Church presents its witnesses.

A nurse, Veronica Egiebor, and two women who provided aid to the (alleged) parturient told how it happened:

The minister approached the woman and asked if she was pregnant. She confirmed. Then he said that the baby she was carrying was not normal and asked, "You want to go to a doctor and expel what are you carrying? Because it's not a baby, or you want to happen here?" People in the congregation started shouting "Yes".

The pastor asked to four women to donate their mantles to form a canopy around the pregnant. The men turn back. The pastor poured the anointing oil and a sachet of water on the woman and asked everyone to pray.

He said that the parturition would start. She was balancing her body. Then she grabbed the leg of someone. She pressed and pushed harder. Something fell and she fell. When we removed the mantles everyone see what was expelled.

I've never seen this kind of thing in my life before. People called goat but it looked like a horse with a long neck and long ears ... The minister told that nobody should touch in the creature because it was demonic. Everyone ran in the confusion and some persons carried the woman though.

Iyamu Silva said: This is not strange to us. During prayers, we perceived that the woman was bleeding. I I saw that something was blocking her uterus. Yesterday ... (Tuesday, 09/11/2012) she came to my office asking for prayers. I think she was not from here (Benin City) because she said that will call her mother in her village.

The medical director of the Central Hospital in Benin City, consultant gynecologist Dr. Jerry Uwaifo does not admits the case and said that is clinically (or biologically) impossible for a woman to conceive and give birth to an animal.

He said: A woman can give birth to a deformed child but not to an animal. Why they don't brought the woman and the creature to the hospital for they be examined?

The pastor replied that doctors can not investigate the case without the consent of the husband or of the fact protagonist. The woman's identity was not revealed.

About the allegations that the case was wrought by the Church to attract more members, Silva challenged anyone to make contestations and added:

Every story has two sides. The truth is that God is working. Signs and wonders are normal things in this church. Nobody can predict what God can do. Silva also informed that the woman said that will make contact and that would be at the church for the day of Thanksgiving.

The general superintendent of the Church, Prince John Ogbovoh said: The baby-horse was exposed for awhile for people could see it but then was destroyed (how it should be done with the things of the devil) because when the news began to spread, the thing became embarrassing.

What this editor thinks? Thinks nothing... only, maybe... that...  anything is wrong with the eye of the creature, something that not seems organic... The journalists were not close enough to check this? Or the need to sell news generates myopia? In anyway, these are strange days... Let's meditate...

THIS NEWS IN PORTUGUESE
http://sofadasala-noticias.blogspot.com.br/2012/09/o-bebe-cavalo-da-nigeria.html