Something is rotten in Humanity kingdom

research of horror and comments: Lygia CabúsWARNING: IF YOU ARE hypochondriac, DO NOT READ 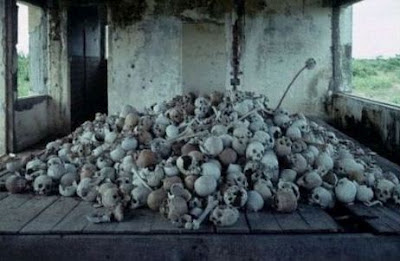 Fear. The world has fear and if hasn't, is on the way ... to the panic. Tens of chemical devastating drugs, dehumanizing are devouring lives in urban centers around the world. Whole nations on their knees destroyed by natural disasters. Mountains of dead animals without explanation.

Parricides, matricides, fratricides, cannibalism. Mysterious illnesses. Unexplained - lights, heavenly bodies, strange in the skies. The Sun in fury. The earth convulsed. Wanted: someone is killing humanity. Nobody knows where they hide the conspirators. They can be humans; no humans; or humans who left to be humans. Horror. The culprit - may be very close, everywhere. May be easy to see, just stop and look, ... in the mirror. 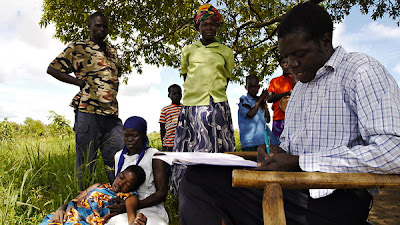 Ojuru - Uganda, Alfred Ojara notes of informations about the patients who he treats. He is a healer. Uses traditional methods to fight the merciless diseases that that is killing children across Africa, especially Central Africa. Against this mysterious disease, he prescribes an elixir of vine's root. Meanwhile, the government, who steals the money from international donors to combat the disease, are investigating the healer criminally, to prosecute him in court and put him in jail. PHOTO: Philippa Croome. 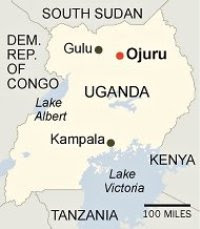 UGANDA, AFRICA. In Ojuru and in many other parts of the country (and in the whole Central Africa), a debilitating and fatal disease, that doctors can not cure, are haunting the people that, desperate, seek salvation with traditional healers.

This mysterious disease was detected some years ago and, since then, its incidence increases without solution. Few or nothing is known about their nature.

It affects only children, attacks the brain and nervous system. Before killing, it interrupts the growth, causes mental retardation, epilepsy, seizures. Are already thousands - children languishing slowly in different regions of central Africa. In Uganda, 200 have died since January this year (2012).

Despite the significant help of the called first world countries, that send medical teams, researchers, medicine and money, nothing get to fight this disease so far (June 2012).

The money, in particular, undergoes a process of corrupt diversion cruel. Recently, $ 200,000 were sent to a Regional Hospital. only $ 4,000 arrived at the establishment. Furthermore, treatment centers, where medical care and medicines are available, are difficult to access for those in need, who lives in villages located in rural areas.

If the disease agent is a mystery, the auxiliaries of death, who steal the money and that, criminally - are doing nothing to implement an assistance strategy for patients, these are well known: they are comfortably installed in the administrative offices of the government of Uganda (and countries of Central Africa).

OTHER AFRICAN COUNTRIES - THE TRULY ZOMBIES

But the incidence of this strange disease that kills children, aged between 5 and 15 years, is not confined to Uganda. Other cases and - possibly the same agent might be causing these deaths, were also recorded in Sudan and Tanzania, for example.

The term "nodding" - "Head Pending" or "Oscillating Head" is due to a notable symptoms of this ill: the head of the sick, pends - falling over the chin and stays oscillating, involuntarily, a sign that the nervous system is seriously affected. Moreover, the children stay confused, indifferent to everything; they are awake but unconscious.

Begin to turn around themselves. Some stay lost wandering through the savanna, aimlessly. Then, this children enter a state of profound lethargy, a sleep without end. They become mere shells of people that they were before. And many close their eyes, to not open them nevermore and this seems to be the fate of all the victims. This can last for years to death final.

The condition is aggravated because these African children are, in overwhelmingly majority, extremely poor and malnourished. Once sick, become easy trapped of any common infection. Further, when they lose consciousness, many suffer serious or fatal accidents such as drowning or fall into the bonfires.

Parents of children report that crises began without any logical reason. Seem to begin when the children eat different foods, or even when the weather changes.

INDIA, BIHAR state. Over the past 15 days, between late May and the first 10 days of June, a mysterious disease has killed 73 children only in the city of Muzaffarpur while other cases are recorded in Gaya (district and city) and in the Bihar state capital, Patna city.

More than a hundred are between life and death in hospitals. With symptoms similar to acute encephalitis, however, this disease is another, not yet diagnosed by doctors, as was confirmed the Minister of Health, Ashwani Kumar Choubey and by the Secretary of Health, Amarjti Sinha. 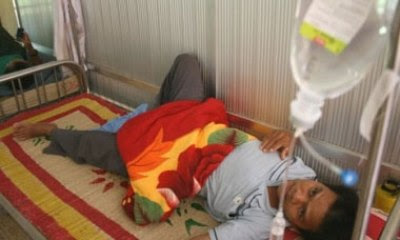 VIETNAM. At Vietnam, the "curse" appeared between April and December 2011. And it was not annihilated. Is in the headlines even today (June, 2012). Defined as a dermatological infection, a skin disease, however, it can kill.

Although the first visible symptom be manifested in the skin, with disease progression, kidneys are affected and - ultimately - can occur to multiple organs failure. It can be overcome if has a diagnosed early but, once established, the disease is almost incurable and deathly.

As in other cases, the cause is unknown and only recently (June 2012) have been speculated a possibility of a poisoning by dioxin, caused by a chemical product, still unknown but carcinogen - that may be present in air, in the soil, food, phyto-therapeutic remedies (medicines made to plant-based) and also in pesticides used to combat agricultural pests. However - this hypothesis, so far (june, 2012), wasn't confirmed. 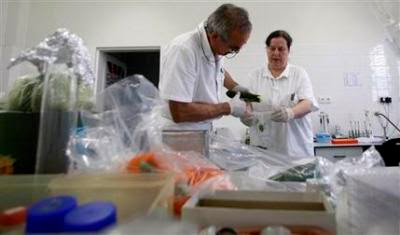 And... No. The photo above is not of a north-american laboratory. It is a laboratory of an Eastern European country, located in Brno, Czech Republic. The date is June 1, 2012. In the image, dr. Pavel Alexa and his assistant, Gabriela Glocknerova are analizing a sample of cucumber in a test of molecular biology. They are working to try to stem the current outbreak of E. Coli that already killed 16 people and infected 1,500 in Europe. Photo: Petr David Josek.

USA. Amid the media fever surrounding the cannibals Americans, citzens of the United States, are watching, perplexed to a multiplication of cases of severe infection and in some cases - deaths, caused by an agent that until recently was not more a concern in the universe of contemporary medicine, especially in developed countries. The bacterium E. Coli. (Escherichia coli).

The first reports appeared in April (2012). Since then six states are already being affected: Alabama, California, Florida, Georgia, Louisiana, Tennessee.

The common species of bacteria is called E. coli O157: H7 but this variety which is spreading in the country is different: it is the E. coli O145, as reported by the CDC - Centers for Disease Control and Prevention of the United States.

Until now, the source of infection was not determined by the health authorities. Patients are being interviewed with the objective of find some circumstance as a link of connection between the infected, as the consumption of some particular food, for example.

The manifestations of the disease occur between two to seven days after infection, usually orally. Patients have diarrhea, often with blood loss and abdominal cramps. In general, the organism itself fights the disease and annihilates the problem in a week.

However, in severe cases, which have always been considered rare, a thing of poor countries, the illness evolves to the so-called hemolytic uremic syndrome, a type of renal insufficiency (kidney) that can cause the death, especially in the elderly, and especially in children under 5 years, most frequent victims of this type of disease. As happened with a little girl, a baby, 21 months old, in New Orleans: she died.

It is a fact that the fields of war are not the same. There aren't battles, no more. Nor explosions, bombs, machine guns. These things are no longer needed. The war can be in any place. No one else need swords or bombs to kill. Just an invisible agent, microscopic, planted in the right places, it is enough to exterminate. It's easy to kill. The silent genocide may be happening now, without anybody to note.