PERU. In the city of Juliaca, Puno region - southwest of Peru, Tuesday, June 12 (2012) - at five o'clock in the afternoon, a tourist, captured in video the fall of an object on fire. Apparently, the object was a meteorite but it may be the fragment a spacecraft (earthly or not) or other device - as a probe or a disabled satellite. 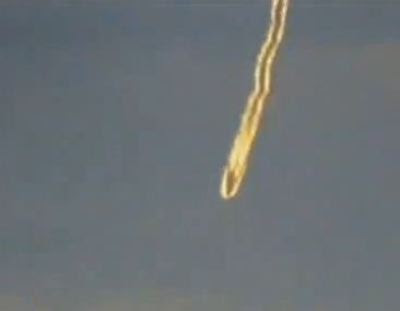 These flaming objects, falling from the sky around the world have become already - a common episode. Perhaps the ease of shooting and / or filming these events,have made ​​possible the abundance of these records, or, perhaps, the humanity's spacial junk is coming back home and - still, who knows... the Earth may be undergoing in some region of the Universe full of wandering meteorites, sons of a recent cosmic explosion. The fact is that never, so many objects - luminous and flaming were seen hovering, moving in the sky or falling on the earth.