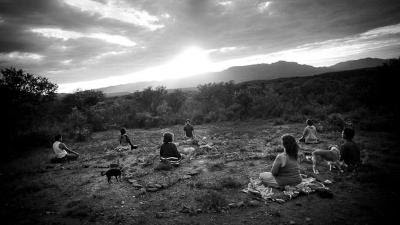 According to the Mayan calendar, December 21, 2012 ends a cycle of 5125 years. In the north of Cordoba, Spain - a group of people founded a village where they live according to the sacred accounts of the Mayans.

SPAIN. Charbonier is a small town north of Cordoba, where the the hot sun makes of any shadow, a blessing. There are three miles from Charbonier, traversing the road San Marcos Sierras on a barren landscape, there, is located the village "Magos de Tollán" - where live a population of few persons: Thirteen women, men and children, nine dogs and a female gray cat. Wizards Tollán is a Mayan village. Its inhabitants consider the place as a Promised Land.

Faced with a wooden gate, a house with hammocks on the door, a mill and a round pool where some children play. Around the house, plants with thorns. A woman, about fifty years old, welcomes visitors with a smile fixed on his face, as if it had been frozen for some kind of magic. She wears long pants, a purple shirt and a crystal applied between the eyebrows. She explains: It is to mark the third eye. I don't use it all time. She presents herself as Seed but his real name is Gladys Mabel.

Beside the gate, near a bell tower, there is a poster. It is written: Aldea Magos de Tollan (Village Magi of Tollán). Another poster warns, in this place is not permited to smoke, consume alcohol or eat meat.

Another woman comes out of a house made of adobe. Her name is Betty. His white hair indicate that she has a certain age. She says she is a grandmother. It is 77 years and is in the village there is three months. It shows the path that leads to a kitchen.

The kitchen, also built of adobe, clay, is a building haxagonal. It is a community space and is decorated with flags, Buddha statues, Mayan calendars. The stove is wood burning. On a counter, jars of peanuts, carrots, beets and other vegetables. And flies, many flies.

In the village, the names are not changed at random by a criterion of personal preference. A supervisor uses a compass to set the name Mayan Mayan inhabitants. The compass consists of three rotating discs.

The reporter who made this matter has been subjected to evaluation and was determined that his name is Mayan Galactic Caminante del Cielo Rojo (Walker Galactic Purple Heaven). In this village, supposedly Mayan, know the name of a person is as vital as know your blood type. Thus, some are called: Eagle, Monkey, Warrior of the Night, Mirrors etc...

The community, which was founded by a couple who lived in Cordoba trabalhando with accounting, formally identified only as Claudia and Rodolfo, lives in their own time and has a motto: time belongs to whoever owns her own mind. They decided to adopt the Mayan calendar and leave the city life, their confort, their behavior patterns.

The Mayan year has thirteen months of 28 days each (is a lunar calendar). Each day has its energy, its color of regency and a specific goal. The names of the weekdays are also different. A Monday can be the day of the Galactic Blue Monkey.

The days are subject to patterns of tendencies, called Wavespell and cycles of thirteen days are subjected to a seal or a galactic signature, a sign astronomical. These post-moderns mayans believe they are living in harmony with the natural cycles of Earth. For them, time is art.

The Magos de Tollán believe that the official Western calendar, with its irregular number of days, produces neuroses and compulsions consumerist. The founders of the village were inspired by the ideas of an American son of mexicans, Jose Arguelles, who began spreading his doctrine in 1987.

Called the Law of Time, this doctrine is based in following the prophecies of Quetzacioalt. He declared himself the reincarnation of Pakal Votan and called himself Valum Votan. Arguelles died on March 23, 2011.

Claudia (one of the founders of the village) explains: We live in a civilization that disconnected us from the cycles of nature. For us, 2012 is the recovery of our galactic consciousness. It is the beginning of a new civilization, a telepathic civilization. We are - the precursors of human beings of the next cycle.

The couple (Claudia and Rodolfo) decided to change its life three years ago (in 2009) when she met the theory of Arguelles. Then live in the city became unbearable. She bought the land of 22 hectares in the middle of nowhere and moved into place with little luggage. They had no water or electricity. Today they have a community bathhouse. Feces and urine are used as fertilizer. All the resources are measured and controlled. Everything is recycled.

However, isolation is not absolute. The Mayas of Spain go to the town of Charbonier often. The children attend public schools. The leaders want that education be - also, an activity of the community but it is not still possible. 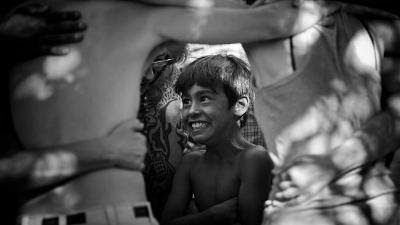 The "Magos de Tollán" meditate in the White Hour. There are no clocks in the community. The "White Hour" is determined by the color of the sun at dawn. They wake to the sound of the murmur of a pink color shell. The shell sends the call to the four cardinal points. The same signal indicates the hour of meals, the hours of work, the hours of walk in the trails, that is also a type of meditation.

A special place was prepared for a special meditation. It's called Ceremonial of the "White Hour". The land was cleared and leveled. On the floor is a large star made ​​of stones. The "new mayans" arrive in silence and bring blankets. They sit facing the mountain in the lotus position.

The community welcomes visitors. However, the "Magos de Tollán" claim that these visitors are attracted by a telepathic energy that is only perceived by the people who are prepared to receive teachings.

The visitors learn to use the Mayan calendar, natural building techniques and participate of sessions of sauna. The experience lasts 13 days. The courses and workshops have their price, which can vary from 100 pesos (Argentina, 25 euros or 32 dolares in may, 2012) to 700 pesos (176 euros or 222 dólares in may, 2012). This is one of the livelihoods of the village.

Those who can not pay are asked to leave something in exchange. Those who decide to stay are installed in tents. Gradually, they can build their own houses of clay. But, appears that these are few, many few - considering that, in three years, only 13 persons are living there.

The "Magos de Tollán" believe that dramatic events are bound to happen. They are the inevitable changes that will finalize a time for that a new time begin to the human race. A Time better. They believe they are fulfilling a planetary destiny, marked on the Mayan calendar, disregarding all predictions of the present civilization and without none commitment with the clocks of postmodern humanity.