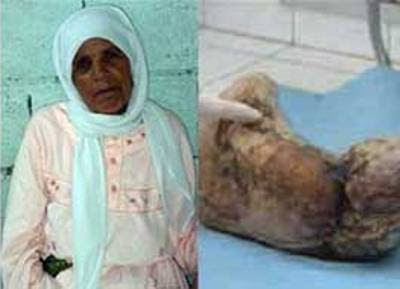 Zahra. Fled from hospital with fear of parturition.

In MAROCCO, Aboitalib Zahra, 75, after remains "pregnant" by 46 years, finally gave birth to a son of stone. It all began in 1965 when Zahra felt the pain of childbirth.

She was taken to a hospital, but after seeing a woman dying on the operating table during a caesarean section, she fled. She returned to her small village in the vicinity of Casa Blanca.

The pains were disappearing, the baby stopped moving and Zahra began to consider the baby in her womb as a "asleep baby" that, according to popular belief, are babies that live inside the belly of themother to protect her honor (of her, the mother) ...

Recently, already elderly, Zahra came back to feel pain and this time, treated at a hospital, doctors performed an ultrasound and found that the "asleep baby" - in true, was a case of entropic pregnancy.

What most surprised the doctors is that woman continued living with the dead fetus in her body as if it were just another organ. After a surgery that lasted nearly five hours, a calcified baby was removed. 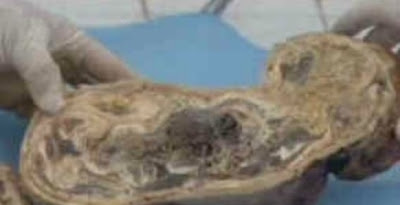 Babies of stone, that are called lithopedions, are an extremely rare phenomenon according with medical records. The Journal of the Royal Society of Medicine informs that only 290 of these cases were reported in all the world.