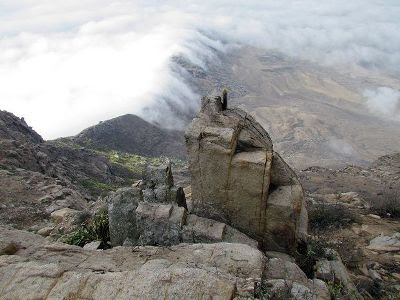 PERU. Peruvian archaeologists have found an altar for human sacrifices belonging to the mochica Inca culture. The utilization of the place has around 1600 years of age.The altar is located at the top of a mountain, a magnific scenary in the region of La Libertad.
On Tuesday (03/04/2012), on the city of Trujillo, situated about 500 km north of Lima (capital of the country), in a interview - the archaeologist Regulus Franco explained: We found the altar where the men were killed, beheaded and then thrown into the abyss, as part of the rituals practiced - 1600 years ago by the Mochica people.
The place, prepared in carved stone was found a month ago, located in the center of the peak of the Campana mountain, 1000 m above sea level, said the expert. The structure - which has approximately 1.5 m high, consists of three blocs of 50 cm in length and has a stone table on top, similar to the called - Intihuatana (a sun-dial) of the Inca city of Machu Picchu in Cusco.
Regulo adds: The altar is on the brink of an abyss, which coincides with the representations that appear on the Mochica ceramics, in which are depicted scenes of beheads where the victims are held with heads down, said the director of The El Brujo archaeological project.

This ancient nation, the Mochicas - have always loved this God of the mountain and, apparently, the sacrifices were made ​​during the summer solstice, a time at which the water from the mountains runs down, irrigating the fields.

Mochica is a culture of the pre-colombian America which reached its splendor between the centuries I and VI AD. This nation occupied a territory that stretched the lands of the northern coast of Peru.
SOURCE: Altar de 1.600 anos é encontrado no Peru. BAND, published in 04/04/2012.
[http://www.band.com.br/noticias/mundo/noticia/?id=100000495344]