CHILE. Lake vanishes for the second time this year 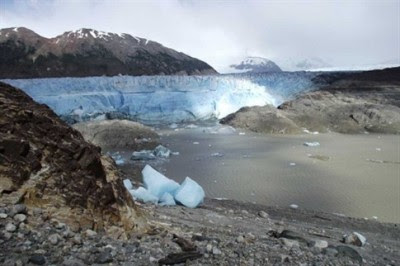 CHILE. Saturday, 31 - 2012. In the Chilean Patagonia, the lake Cachet II, lost its 2,000 millions liters of water or 31 meters of its level - in less than 48 hours causing an increase in the flow of the river Baker, the major river of the country.
This is the second time only in this year, that this phenomenon occurs. The first time - that it happened, was in 2008. This is 11ª time that the fact is registrated in these proportions. According to the Chilean authorities, in 27 of january (2012) the lake stood empty but back to full some time later.
The rapid depletion of water levels the lake Cachet II produces the correspondent increased of waters flow in the Baker River, the longest river in the country as well the level of another lake, situated in La Cologne. The flow tripled, increasing from 1100 to 3511 meters per second cubic. The level of the lake in La Colonia grew by 6.6 meters.

Population has fear of damages to property
The Chilean authorities have stated that due to the emptying of the lake, the flow of river Baker waters will continue to increase. It is necessary to take precautions. Residents fear that increases of the flow, the rise of the waters cause damages to properties closest, like floods on fields.
Scientists are investigating this phenomenon - the emptying process that occurs in some lakes in the Chilean Patagonia. The Direction General of Waters, through the hydrometeorological stations belonging to the Ministry of Public Works, constantly monitors the situation and, in such cases, the oficial organs are informed to emit the necessary alerts.
According to Spanish press reports, the director general of the Regional Water Questions, Matías Desmadryl, explained that: ...as this has happened in recent years, the emptied of the lake, so - this is an event more or least waited.

An underground tunnel ice
The causes of the process of emptying of Lake Cachet II, located in the Aysen region, about two thousand kilometers south of Santiago (capital of Chile) - these causes still aren't completely explained. It is assumed that the global warming is related to the event.
Two glaciologists, Andrés Rivera and Gino Casassa, are studying the hypothesis of the occurrence of a "GLOF" - Glacial Lake Outburst Flood - which is a collapse of a glacial lake.
The glacier Colonia - Chile, where where is located the lake Cachet II, serves as a natural dam containing the lake water. In recent years, heatexcessive, unusual about the glacier has caused the rupture of the ice. When one of the fissures of the glacier don't resists to the pression of the liquid mass, when the lake is full, a strong course of water runs through an underground tunnel emptying the place in a few hours.
Scientists think that in the case of Lake Cachet II, the tunnel stretches for eight kilometers, reaching to the nearest lake, that is the lake of La Colonia.
The two scientists argue that deflation - that is a natural phenomenon in glaciers - is favored by the high temperatures that have increasingly occur in Patagonia. During the last summers the temperature can reach over 30 degrees Celsius for several days.
The phenomenon is known in Chile and South America since the years of 1950 but there isn't evidence of similar processes have happened, in these proportions - in the past. Scholars believe that the occurrences - of this kind - could be - each time more frequent as a result of climate change. A. Rivera and Gino Casassa explained that the water does not disappear, just change your cycle.
The General Directorate of Water has announced it will make continuous monitoring of the phenomenon through the stations of the hydrometeorological network to registrate any change in behavior of the lakes and rivers.
SOURCE: Lago no Chile desaparece pela segunda vez este ano.
Jornal de Notícias/Pt, published in 04/04/2012.
[http://www.jn.pt/PaginaInicial/Mundo/Interior.aspx?content_id=2402329]