This is an absurd - But it is something for Charles Fort 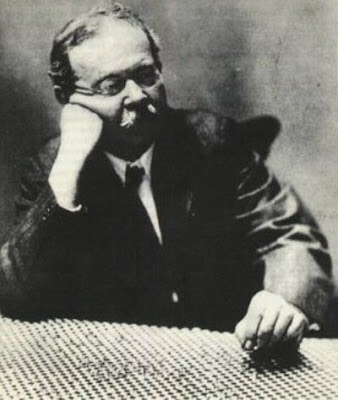 Mr. Charles Fort
Due the number of hits this blog because of the article below "Machine dated at 400 million years found in Russia" I think that is urgent and necessary investigate a little more. (Here, at Brazil, an academic journalist is a professional that has to has ethic. We are instructed by this way. For this reason, none matter or note is published in this blog without mention the source - like occurs in many others sites and blogs).
I searched that was possible about the issue and discovered this: in fact exist a scientist with the name Yuri Gobulev. I found a profile of him IN [http://www.cmi.univ-mrs.fr/~golubev/].
This man, really appears to be a researcher of some complex issues like: nonparametric and semiparametric, Hidden Markov Models, detection break in time series, inverse problems, stochastic volatility models (I don't understand nothing about this issues).
The profile also presents him like "Directeur de recherche au CNRS". CNRS is National Center for Scientific Research (French: Centre National de la Recherche Scientifique). All indicates that he lives or at least he works in France, and not in Russia like we can think.

This provides some consistency with regard to the contact of a scientist named Y. Gobulev and his declarations - that were published in Italian blog and attributed to a scientist with that name. Note that, the name "Gobulev" appears in the final of the Italian original as if himself, the scientist, was the author and hat sent the matter. This is somewhat strange.

Another important point refers to access to the page where I found the text in italian. Hard to find? For me too. However, "Master-Google" cached shows:

Of course, I had the care to save this record.

After all, who can tell if Italian blog editor removed the web page? Until yesterday, 08/03/2012 - I could access the same page easily.
Despite the arguments, that consider - the italian publication - this news - something suspicious - including myself too - I translated and published it in this blog for a reason: fortean spirit. I believe that even with the suspicion that the picture shows only fossils of arcanes organisms, I think that - someone like Charles Fort - will not put this in the trash basket. He collected strange facts reported in newspapers of all the world - even being absurd at first sight. I think that Mr. Fort would put this in a session of your files. (Now, I will work in peace)