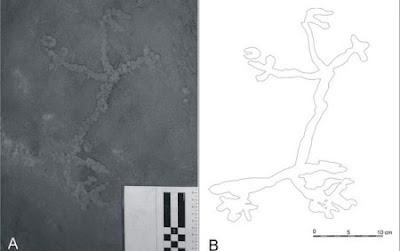 Photo: Neves WA, Araujo AGM, Bernardo DV, Kipnis R, Feathers JK
BRAZIL. Researchers at the University of Sao Paulo found a drawing of an anthropomorphic figure dating from 9000 to 12,000 years, and would therefore, according to scientists, this prehistoric figure is the oldest ever discovered in the Americas.
The study authors, led by researcher Walter Neves, said the discovery suggests that - at that time, the presence and development of man in South America was very different - not only restricted to people who made stone tools for subsistence, not only the neolithic tribes but also persons able to formulate symbolic thoughts.
The figure, which measures about fifteen inches wide by twenty long, was found in Lapa do Santo in the region of Lagoa Santa, state of Minas Gerais, southeast region of Brazil.
* Researchers identified the drawing like an anthropomorphic creature but - this does not mean that is a man. The traces resemble a somewhat animalistic creature, something like a reptile, for example.
SOURCE: Desenho rupestre mais antigo das Américas é descoberto no Brasil.
Ultimo segundo/IG, published in 22/02/2012
[http://ultimosegundo.ig.com.br/ciencia/desenho-rupestre-mais-antigo-das-americas-e-descoberto-no-brasil/n1597648406315.html]