The case of the communion wafers consecrated with LSD 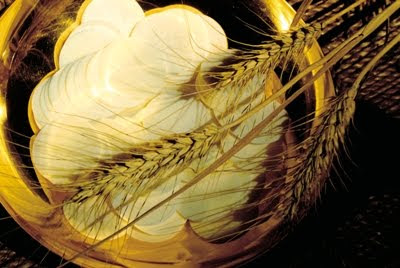 CAMPOBASSO-BOJANO, Italy. Sunday, 19 of 2012. In Campobasso, capital of the province of the same name (Campobasso province), in the Spirito Santo church - a bizarre incident caused a massive disruption during a mass in the moments following the procedure of holy communion, when the priest delivery the consecrated host (the communion wafer) to the believers (the faithfuls). According to the news there was something wrong with the small-bread of the Eucharist.
The effect was immediate. The church Spirito was taken by the chaos: someone claimed to have visions of saints, others took the crucifix. Two elderly women chased the priest and - having reached him, they grabbed his clothes screaming: You're the devil.
Later it was found that it was a case of "ergotism" which is a food poisoning caused by milled cereals contaminated ergot sclerotia, that is the basic principle of the LSD. Probably, the flour used to produce the communion wafers have been infected with this substance may cause hallucinations in less than one minute.
The priest, Dom Achille, who had been forced to take refuge in the sacristy, nothing more had to do: he called the police to evict the crazed persons from the church. The expulsion occurred with great difficulty to the officers.
However, the Archdiocese of Campobasso-Bojano through the Diocesan Office for Social Communications and the diocesan press office denies the occurrence and claims that the news is a hoax, invented. According to the Archdiocese the false report is a attempt to attack the credibility of the Catholic Church and condemned those responsible for the original publication of the case, the newspaper Abruzzo24ore (http://www.abruzzo24ore.tv/)
The representatives of the diocese declared - yet - that there isn't a church of the Santo Spirito em Campobaso-Bojano or a priest named Don Aquille. However, the Abruzzo newspaper continue to claim the veracity of the story.
NOTE: This editor does not know where the truth is however, a detailed search on Google did not find a single image of the Church of the Holy Spirit to which refers to the news although there are several churches in the province. This fact is enough strange and gives to the version of the Archdiocese of Campobasso-Bojan a strong chance of being true and the news of the ABRUZZO24ORE, appears to be false. After all, where were the mobile phones - always present in this post-modernity to record the episode? Furthermore, none of the articles was illustrated with a single image of such church. Millennial Wisdom: If something do not appears in Google, does not exist. Let's meditate
SOURCES
Campbasso:Ostie Allucinogene, Fedeli sotto LSD.
CADO IN PIETI, published in 23/02/2012
[http://www.cadoinpiedi.it/2012/02/23/campobasso_ostie_allucinogene_fedeli_sotto_lsd.html]
Ostie allucinogene: interviene anche l'Arcidiocesi di Campobasso-Bojano
ABRUZZO24ORE, published in 24/02/2012
[http://www.abruzzo24ore.tv/news/Ostie-allucinoggene-interviene-anche-l-Arcidiocesi-di-Campobasso-Bojano/72577.htm]