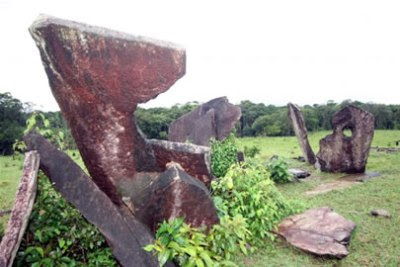 BRAZIL. Amapa state. In Calcolene, a small city located to 390 km of Macapa, capital of the Amapa state - north region of Brazil, on the banks of the igarapé* Rego Grande, a set of strange stones, with no doubt work of human hands is considered the amazonian Stonehenge. The archaeological site has been studied since 2005. The structure that resemble the british cycle is composed by large pieces of worked granite and has around 30 meters of diameter.
* IGARAPÉ: 'arm' ou course of water originated from a river which extends into the earth, like a creek.
According researchers, the place was used by indigenous populations that inhabited the region by 1,100 years ago for the realization of rituals . Some of this cerimonies - were performed in the epoch of the summer solstice, when the position of the stones blocks allowed the observation the course of the sun..
The researcher of the Instituto de Pesquisas Cientificas e Tecnológicas do Amapá (Iepa - Institute of Scientific and Technological Searches), João Saldanha that date was special for natives. He explains: It is a period marked by the rains, changing completely the landscape providing the harvest and collect food in abundance. Saldanha still tells that the place was used like a cemitery too, the last rest for important personalities of the tribes. Other minor monuments that were found there - are tombs of other persons, being these - less importants.
The place stood forgotten for many years. Only in 2005 it returned to attract the interest of the government. Since then, numerous pottery objects - were discovered. Similar objects were found in other nearby places like at the Amapa state (Brazil) and Guiana Francesa (French Guyana). The theory of researchers is that the violence of the European invaders, in century 16, provoked the exit of these tribes in search of refuge in other areas, less accessible to the invaders.
SOURCE: Sítio arqueológico “Stonehenge amazônica” é estudado no Amapá
Portal Amazônia, published in 31/12/2011
[http://www.portalamazonia.com.br/editoria/ciencia-e-tecnologia/sitio-arqueologico-%E2%80%9Cstonehenge-amazonica%E2%80%9D-e-estudado-no-amapa/]