The amazonian spiders and its giant webs 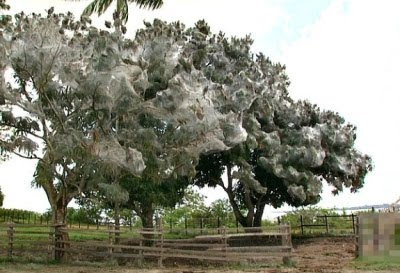 BRAZIL. Amazonas state. Amazonas state. In the city of Iranduba, metropolitan region of Manaus (state's capital) - the trees are periodically covered by cobwebs of the anelosimus - specie nearby the family of the 'black widows'.

In some cases the entire canopy of a tree is taken by this tissue produced by this spiders. Every three months, the locals clean the trees but the colony begins to produce the webs again.
A researcher at the National Institute for Amazonian Research (INPA), said that the phenomenon is unusual, since spiders tend to live alone. She also said that there is no need to worry about poison because its effects only affect insects.
SOURCE: Aranhas constroem teias gigantes no Amazonas
O Dia, published IN 09/02/2012
[http://odia.ig.com.br/portal/cienciaesaude/aranhas-constroem-teias-gigantes-no-amazonas-1.404869]
Postado por SOFA DA SALA REVISTA às 12:54 AM