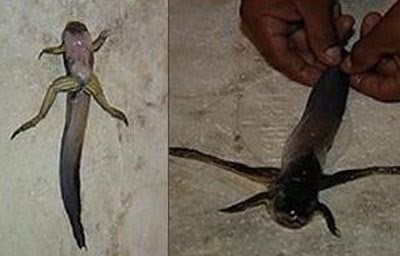 PARÁ state – In Uruará location, near the city of "Porto dos Milagres"a fisherman known as "Neuzito" captured in his fishing net a strange creature. Its head and tail seem like of a fish. Where there should be fins, there are the legs of a frog.
The fisherman, intrigued, said that never saw similar animal. It measures around 30 centimeters and called attention of the local dwellers that gathered to see it. His limbs doesn't has fingers. It doesn't has gills too. The photo of him was published at the Tapajós TV website and it hoped the help of readers to indentify the animal.
SOURCE: Pescador captura estranho animal em Uruará, no Pará.
IN O Globo, published in 04/27/2011
[http://oglobo.globo.com/cidades/mat/2011/04/27/pescador-captura-estranho-animal-em-uruara-no-para-924330022.asp]