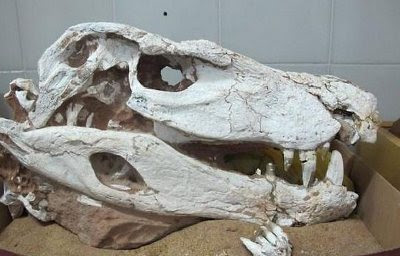 SÃO PAULO state/Br – On a farm situated at the locality in Jales, near the city of Sao Jose do Rio Preto (SP state), a crocodile fossils attracted the attention of the international scientific environment. Twelve nests of the beast were found with remnants eggs of these primitive reptile known as Baurusuchus pachecoi. The fossils date back 85 million years ago. Therefore belong to the Cretaceous, the last period before the extinction of dinosaurs.
In Brazil, the species was found for the first time in 1945 in Paulo Faria. This time, along with the nests were also rescued a skull of the arcane crocodile in perfect conditions of conservation. The descobeta was published in the journal Palaenontology. The paleontologist Carlos Eduardo Maia, who discovered the fossils says that he and his team had the honor of give the name to the new finding: Baurulithus fragilis.