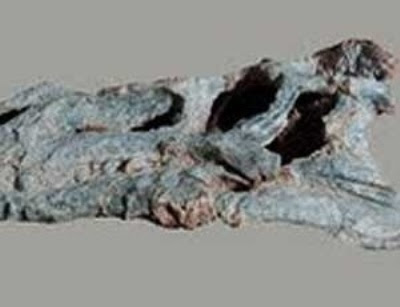 Cranium of "Decuriasuchus" found at hinterland of Rio Grande do Sul state, south of Brazil. The predator, who lived in the Triassic period, is older than dinosaurs known.

Rio Grande do Sul (state) – In the city of 'Dona Francisca' in a place called 'Quarta Colônia' (Fourth Colony), researchers of the Museu de Ciências Naturais da Fundação Zoobotânica do Rio Grande do Sul (Museum of Natural Sciences of the Foundation Zoo-botanical of Rio Grande do Sul) e da USP (University of São Paulo) de Ribeirão Preto (city of São Paulo state) – they presented to the worldwide scientific community a fossil from 240 million years ago.
An article about the discovery was published this month (march) by the german scientific review Naturwissenschaften (Science and nature). The text is signed by the Paleontologists: Marco Aurélio Gallo de França (USP), Max Cardoso Langer (USP) e Jorge Ferigolo (of the Museum). 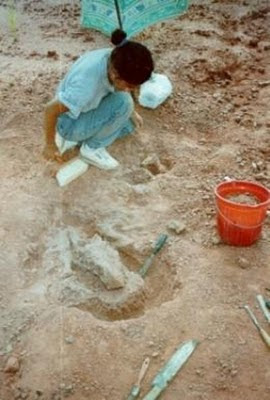 Nine of the ten fossils in the site were found together. Footprints of diferent sizes were found too. The researchers belive that they could made by a mothers and puppies. The animals are so much distant relatives of the actual crocodiles. Furthermore, the discovery is uncommon because the pieces were found almost entirely intacts.
The animals that are a new spécie that was identified like belonged to the Rauisuchia group and it was named Decuriasuchos quartacolonia. It was predator carnivore of the Triassic period. Its size was about 2.5 m and a half long and had serrated teeth.