The enchanter of buffalos 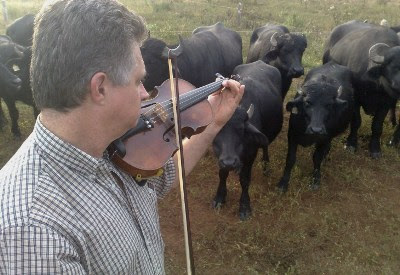 See the video in Zero Hora

RIO GRANDE DO SUL – At General Câmara city, Vale do rio Pardo region, the cattle breeder Antonio Carlos Trierweiler, 47 years old (2011), owner of the Site of the Buffalos, has a poetic manner to conduce his flock. Without trumpets or horses, he uses only one violin to gather the herd.
Like the flutist of the Hamelin had the power to attract children and rats with his instrument, Mr.Trierweiler does the same with their portentous animals.
Besides being a lawyer, the cattle breeder, is also veterinarian and amateur musician. He played piano until an accident injured his right hand. After this he could not more to play the instrument. Then, learned to play guitar. Established as cattle breeder, when he were with 37 years, discovered violin.
In 1997, he was practicing on the balcony of his house when noticed the interest of the buffalos. That day, for the first time the animals begun to reunite themselves. They were atracted by the melody. Those huge animals were enchanted by the music. One song in particular: Amazing Grace, the repertoire of Elvis Presley.
SOURCE: Pecuarista usa o som do violino para atrair búfalos no Vale do Rio Pardo.
IN Zero Hora/Clirbs – published in 08/05/2010
[http://zerohora.clicrbs.com.br/zerohora/jsp/default.jspuf=1&local=1&newsID=a2898373.xml&channel=13&tipo=1§ion=Geral]