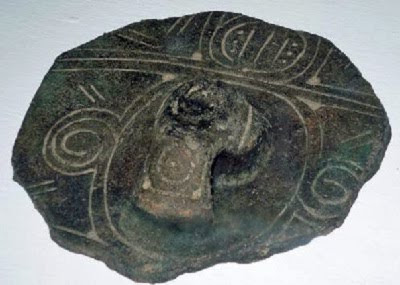 Among the artefacts there are pots and dishes.
Photo: Andina (Official news agency of Peru)

PERUVIAN AMAZON – 140 archaeological objects objects like stone and axes diferent tools used in textil industry were found at peruvian Amazon at last months of 2010. The artefacts were discovered at High Amazon region, north of Peru. The findings are being dated about 1,200 years old. The existence of this kind of stuff indicates that, the ancient inhabitants of the rain forest had developed a culture of produtive.
The artefacts were rescued by the Instituto de Investigação da Amazônia Peruana – IIAP (Peruvian Amazon Research Institute ). According to archaeologist Santiago Rivas, the finding was revealed after a landslide caused by heavy rains in the region. The occurence brought to the light some of the material. A local resident, noting the possible importance of the pieces, reported the fact to some researchers that were there, rightly to investigating the area in search of an archaeological site.
Besides the stone axes, pots, dishes, a sculpture of a human being and others fragments were discovered. These relics are a further clue to unveil the mystery surrounding the existence of very old civilizations, which can have lived in Americas in an epoch of forgotten times.