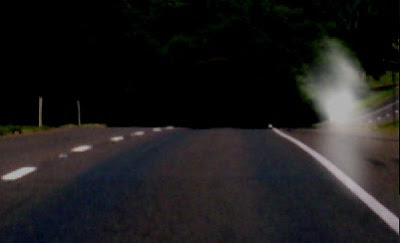 SÃO PAULO – In this world of modernity, since the mid-twentieth century, the list of the places haunted traditionaly, this list was expanded. In the past, ruins, graveyards, abandoned houses, for example, were places of refuge for lost souls.

Trapped spirits to their earthly woes remain linked to the places where they experienced their last moments of life interrupted, in general, by violent death.


With the advent of new ways to die, as car accidents on highways, the transit routes they also became, in some cases, places, cursed by ghostly apparitions.

Today, almost all networks of motorways, as well as local roads and even rustic trails, have their hauntings in certain stretches. Brazil, of course, also has their hauntings of road.


Here are some examples: At Marechal Rondon highway (SP-300) a ghost bride appears to travelers. The apparition is a young woman. She uses a beautiful wedding dress, white, embroidery, with veils and gloves. The bride appears waving to motorists, asking them to stop. She seems desesperate.


According to local legend, the ghost bride appears dressed to marry for a reason. She died victim of an accident during the trip by car between the cities of São Paulo state, Bauru and Pirajuí, where the cerimony would be realized.

On the same road, still in the state of Sao Paulo, the stretch between the cities of Bauru and Jundiai alo has a haunting. The apparition of a black woman accompanied by a blond child who appears to have two years old.

Elsewhere of the same highway the specter of a cop seems to be stuck in some situation, He appears from nothing and remains unmoved, vigilant, even under strong storms.