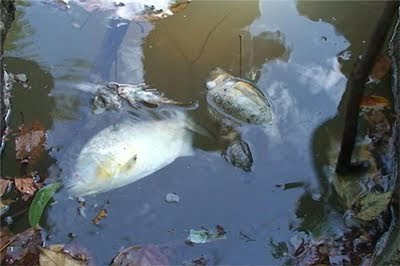 AMAZÔNIA – At Rolim Moura city, in the rivers Bambu and São Pedro, the waters stand empoisoned. Since early July (2010) thousands of fish have been found dead. And the fishes are not the only victims. Other animals are suffering of the mysterious evil. Capivaras (or capybara, Hydrochoerus hydrochaeris), jacarés (Alligatoridae), oxes and other species have been also found dead.
Environmental authorities believe that this is a case of pollution by pesticides. Analyses will be made to determine the cause of the disaster. The population was warned not to use the waters of those rivers. Even baths and other hygienic practices can be dangerous to health.
According to technicians from IBAMA (Instituto Brasileiro do Meio Ambiente e Recursos Naturais) the mere contact with the water of these rivers can cause skin changes. Many fish were found still alive but the bodies structures stood necrosed. The poison acts slowly decomposing body mass of animals.
SOURCE: Mortandade ainda é mistério.
IN DIARIO DA AMAZÔNIA published in 07/30/2010
[http://www.diariodaamazonia.com.br/diariodaamazonia/index2.php?sec=News&id=4522]